New research by ILR Assistant Professor Brian Lucas indicates that there is a disconnect between people’s beliefs and the reality of how their creativity emerges over the course of a project. 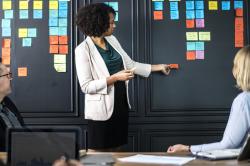 Individuals believe their creativity wanes over time, but new research co-authored by Brian Lucas shows that people’s creativity, on the whole, remains constant, or actually improves, as they work on a project.

“In today’s economy, most work requires some amount of creativity and problem-solving,” Lucas said. “Even the most average worker at the most boring widget factory generates creative solutions when faced with equipment malfunctions, logistical errors, grumpy clients, problematic employees and initiatives to cut costs or increase safety. Given this, it is important for workers to understand how their ability to generate ideas unfolds over time. This knowledge allows them to make informed decisions about how much time and effort to invest into creative work – to keep going when there are creative ideas left in the tank and to stop when they have truly exhausted their ideas.”

Across eight studies, Lucas and co-author Loran F. Nordgren, of the Kellogg School of Management at Northwestern University, tested whether people understand their own creativity.

According to the Lucas, “It is difficult to anticipate how creative your ideas will be over a certain period of time. You may hit an inspirational hot streak and come up with amazing ideas, or you may not. So when people are asked to predict how creative their ideas will be, they tend to rely on a source of information that is easier to anticipate: how many ideas they will generate. As with most things requiring physical or mental energy, idea productivity tends to decline over time. So, people think their creativity fades because they associate that decline in the quantity of ideas they generate with a decline in the creativity of the ideas they generate, even though this is not the case.”

To combat this in the workplace, Lucas suggests that managers allow employees to gain experience by doing creative work, which will allow them to naturally observe that they are able to generate creative ideas for longer periods. Or, if the worker’s role doesn’t require creativity, he suggests implementing a strategy like 3M’s program that allows employees to use 15 percent of their paid time to pursue their own creative ideas. Another recommendation would be to pair workers with low creative experience with those that have strong creative experience, with the hope that the experienced worker can pass on insights about the creative process to the less experienced worker, either explicitly or tacitly.

“The creative cliff illusion is, at the end of the day, an illusion, or an inaccurate belief,” Lucas said. “One way to address the problem is to correct the belief.”