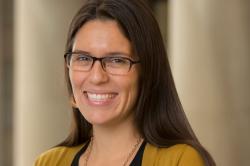 What is your research about?
My research focuses on how bureaucracies enforce workplace protections, the ways in which precarious workers mobilize their rights, and the role that intermediary institutions, such as labor unions and other community organizations, play in advocating on their behalf. I am especially interested in the experiences of immigrant workers, and the impact that documentation status has on these processes. Though I have been trained in sociology and demography, I often work with colleagues across different disciplines (Political Science, Latinx Studies, and Law), and engage with quantitative and qualitative methods. Much of my work is comparative; I am always interested in how local context shapes government responses and advocacy strategies.

Given all the events of the past year, where will your research have the most impact?
I think one of the biggest lessons my research has to offer is that it is not enough to pass additional laws that protect workers' rights. These rights must be actively implemented and fought for. The extent to which we can protect the rights of our most vulnerable workers will have a direct, positive effect on the rights of all workers. And when we chip away the rights of some, this should be a warning for the rest of us that we might be next.

For non-citizen immigrants, especially in the current era of intensified immigration enforcement, we tend to assume that employers are working hand in hand with immigration authorities. But my research with Kate Griffith reveals that employers themselves are also subject to immigration regulation, which in turn creates worker precarity and harms not only undocumented immigrants, but temporary and other immigrant workers as well.

Workplace raids and audits play a huge part in detention and deportation actions. This is not limited to the current administration, is likely to play a significant part in the next president's immigration strategy, and has devastating effects on workplace rights.  These are overwhelmingly workers of color – and their families – who are impacted.

My research intends to better understand the structural forces that have given rise to these inequalities, the power (but also limits) of civil society to push for greater parity, and the important role that place plays in differentially shaping the experiences that workers are having across the U.S.

As ILR celebrates its 75th anniversary and looks to the next 75 years, how do you foresee your research contributing to the future of work, labor and employment?
The future of work is one where the percentage of workers who are foreign born will likely continue to rise, where labor unions will represent fewer and fewer workers, and where the formal protections afforded workers will become increasingly thin as regulatory agencies are defunded and the workplace becomes increasingly fissured through outsourcing and the gig economy.

My research focuses on how some of the most vulnerable workers mobilize their rights, and the clearest conclusion is that labor and employment laws can no longer passively rely on worker claims to do the heavy work of regulating employer behavior. And as we craft better protections on the job, we must also look to the various forms of social protection that have been eroded, including a truly meaningful social safety net that provides a livable income, universal healthcare, and the basic right to food and housing. In the midst of the dual pandemics of COVID-19 and centuries of structural racism in the United States, we can no longer simply point to the market and business sector to right these wrongs.