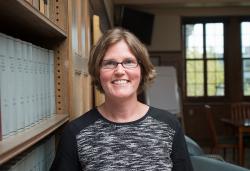 Griffith is the Jean McKelvey-Alice Grant Professor and Senior Associate Dean for Academic Affairs, Diversity, and Faculty Development at Cornell's ILR School. She is also an associate member of the Cornell Law Faculty. A Research Fellow affiliated with NYU’s Center for Labor & Employment Law, Griffith's scholarship focuses primarily on the intersection of immigration and workplace law and legal issues affecting low-wage workers. She is a co-author (along with Harper and Estreicher) of the textbook Labor Law: Cases, Materials, and Problems (9th Edition, 2021). She has published in the California Law Review, the Cornell Law Review, and the Law & Social Inquiry Journal, among others. She has received Cornell ILR MacIntyre Awards for Exemplary Teaching (2010 & 2015), a Robert Stern Award for Teaching and Mentoring (2019) and has been selected four times as the Most Influential Faculty Member by Merrill Presidential Scholars. In 2018, Griffith was named a Stephen H. Weiss Junior Fellow, Cornell's highest teaching award for Associate Professors.

Griffith joined Cornell in the Fall of 2007 after completing a Skadden Fellowship as a Staff Attorney at the Workers’ Rights Law Center of New York, Inc. in New York’s Hudson Valley. Prior to the Skadden Fellowship, Griffith served as a Law Clerk for the Honorable Rosemary S. Pooler in the U.S. Court of Appeals for the Second Circuit. She is a cum laude graduate of NYU School of Law, where she was a Root Tilden Public Interest Scholar, received the Sol D. Kapelsohn Prize for highest excellence in writing in the field of labor law and served as the Editor-in-Chief of the N.Y.U. Review of Law and Social Change. Before earning her J.D. from NYU, Griffith conducted research on women workers and labor law in Mexico as a Rotary Scholar and in El Salvador as a Fulbright Scholar.