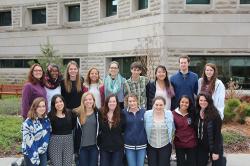 An ILR Global Service Learning Program team of 17 students is in India with the Swami Vivekananda Youth Movement.

The group includes nine ILR students and eight Cornell students who are Global Health minors. They are blogging about their experiences in India at http://ilrcornellinindia.blogspot.com/.

The Swami Vivekananda Youth Movement is a community development, non-religious, non-political organization working for the benefit of indigenous and rural people in southern India through education, health care and empowerment initiatives.

During their first two weeks in India, students studied subjects including Indian culture, labor and health care through courses at the Vivekananda Institute of Indian Students.

They also studied the Kannada language in preparation for field projects.

Eight ILR students taking part in the program were funded through the support of Mukesh and Radhika Sehgal and one ILR student was funded by ILR’s K. Lisa Yang and Hock E. Tan Employment and Disability Institute.

ILR students in India are:

Participants who are Global Health minors include: