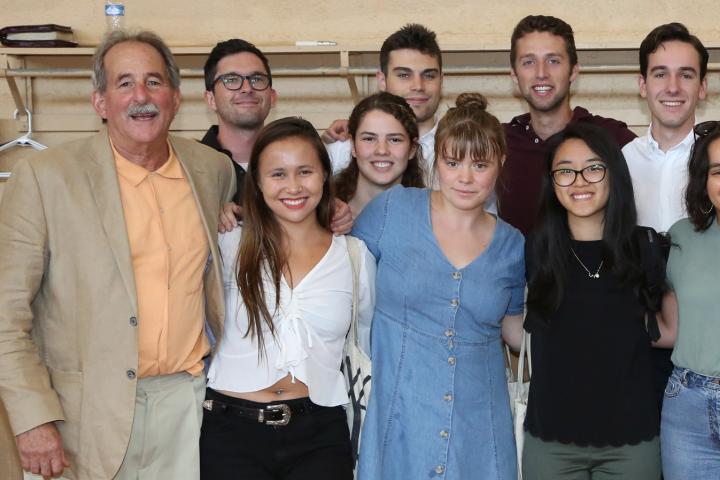 In fact, the ILR lecturer who routinely teaches upper-level and graduate courses in employment law and public sector policy had no intentions of creating a new class at all.

All he really wanted was just a little travel money to fund his passion project – interviewing community organizers in Appalachia about the work that was done there in the 1960s and 1970s.

Adler, who worked as a civil rights and labor and criminal lawyer in West Virginia for nearly 20 years before arriving at ILR in the mid-1990s, saw the work being done by those volunteers and activists first-hand. As a young lawyer he helped the underrepresented, the working class and their unions, and widows and coal miners with black lung disease claims. He also won a pair of landmark discrimination cases involving national origin, equal pay and sex discrimination. This was also when he met a multitude of dedicated individuals, many of whom were working through VISTA, established by President Lyndon B. Johnson to fight the War on Poverty.

“All kinds of people were attracted to come to Appalachia at that time because the region was facing tremendous economic hardship,” Adler said. “They thought they were going to be ‘Dudley Do-Righters’ and they were going to ‘help these poor people.’ But once they got there and worked with people, they were actually taught by the people in West Virginia how to be helpful to West Virginians.

“There are a zillion stories about what happened, and the things these community organizations did. But these people are going to die and their particular stories aren't going to be known. And I just thought I have an obligation. I would be a good person to capture these stories.”

With that sense of responsibility in mind, Adler bought a palm-sized digital camcorder in the spring of 2018 and began making the 525-mile trip to Beckley, West Virginia, and other parts of the Southern West Virginia coalfields to record interviews with friends and acquaintances who participated in various social justice movements and created vital institutions there from the late 1960s until the present.

Eventually, Adler sought outside funding for his project and was introduced to Cornell’s Office of Engagement Initiatives.

“I told them what my project was,” Adler said. “And the woman I spoke to, Amanda Wittman, said ‘You know so many people down there, why don’t you sketch out a class and apply for an Engaged Undergraduate Research Grant?’ And I thought, ‘There’s no way I could do that. How would I take students to West Virginia?’ But, she said it was possible and was super supportive.” 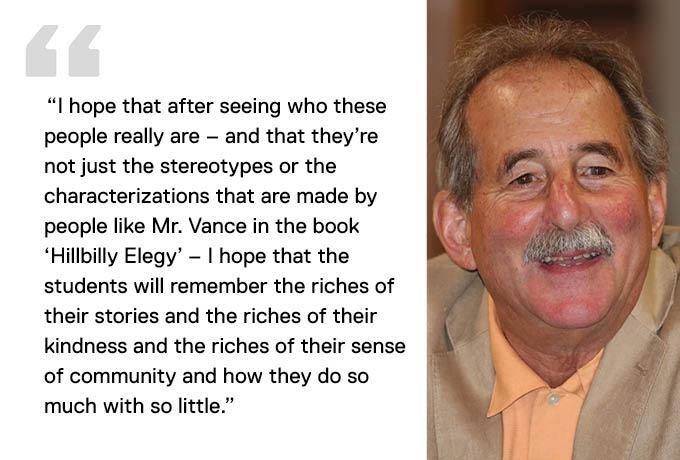 Just before the fall term, Adler took 11 students to West Virginia for a week to meet with the community partners he identified, including clinicians and practitioners who treat those who lack adequate healthcare for obesity, diabetes, opioid addiction and black lung disease; activists who provide fresh water, indoor plumbing and home refurbishing; female leaders who struggle for equality in the coalfields; and schoolteachers who were instrumental in the 2018 West Virginia teachers' strike.

The first day of the class, the students met Carrie and Mike Kline, who Adler describes as “folk singers who see themselves as political change agents and representatives of poor people.”

Twenty-five years ago, the duo was hired by the National Park Service to go to Wheeling, West Virginia, to do an “ethnographic survey.” In their three years, they conducted 170 recorded interviews, and used those as the basis to write more than 30 newspaper articles and produce a 22-part radio series addressing issues of human rights.

“The idea that getting the story straight is an important step in any sort of redevelopment effort, to document voices and opinions not usually heard in a public arena, or discussions of public policy” Mike Kline said. “Hearing one’s own voice in the context of many others imbues a sense of collective strength unavailable in any other way. It’s an empowering notion and can strengthen participation and extended conversation in any community.”

To this day, the Klines continue to go around the state and teach community groups through “Listening for a Change,” a structured class in which they teach interviewing techniques based on deep and active listening “as an alternative to beating people to death with questions.”

Students used skills they learned from the Klines to ask insightful questions of the 30 community leaders who the class visited over the week, Adler said.

“At every single juncture, our students stepped up,” he said. “They asked really fabulous questions, and listening and interviewing were going on throughout every day, all day.” 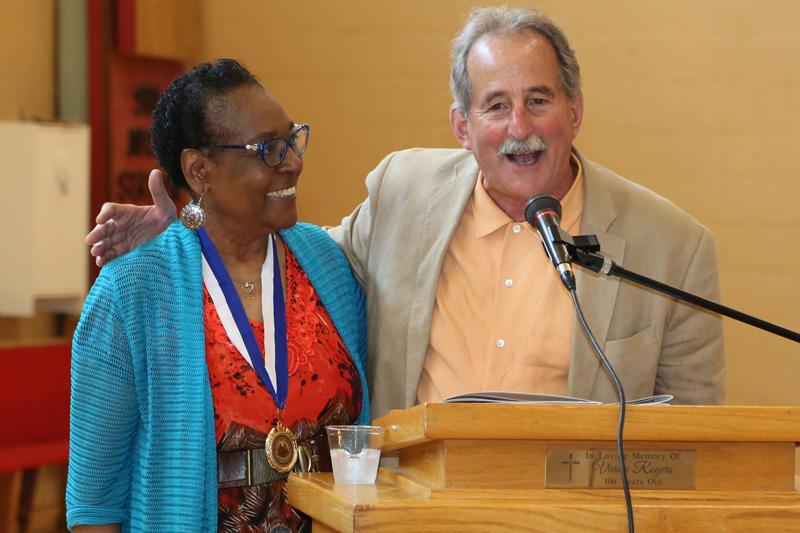 At the end of the week, the students returned to Cornell for the second portion of the class, a seven-week study on the history and politics of West Virginia. They examined the socioeconomic forces of the coalfields, the role of fundamentalist religions and their impact on society; the role of the United Mine Workers of America union in shaping the state’s civic and political makeup; the history of the most dramatic labor battle in American history, the Blair Mountain Wars; and the roles of race and racism.

“This class really reinforced the idea that engaged learning is a necessity within these elitist spaces,” said Delaney Ho ’21. “The approach these classes usually take is academic text first and then enter the community with that framework already in mind. I appreciate that this class rebutted that. I think it helped me enter that space with a clear mind and no expectations, which gave me a more holistic learning experience in West Virginia. It wasn't tainted by academic text. If I had done [those readings] before coming to West Virginia, I think it might have spun my experience in a different way.”

For Adler, flipping the traditional approach by having students travel to West Virginia before reading about the culture of Appalachia was a deliberate choice to help combat stereotypes.

“So many people find it very easy to take West Virginia and compartmentalize it and put it into a model of forgotten ‘Trump Country,’” said David Leynov ’21. “I felt like after I left, I had an obligation to share the truth, or my version of the truth, that I had learned about West Virginia based on my interactions with people. I feel that I have some obligations to correct the mistruths about West Virginia, but I also can't really explain it in a way that does justice to the complexities.”

Adler is optimistic that the students now have “a better sense of how complex our country is.”

For the students, the class seemed to do just that.

“I think West Virginia was a catalyst for me,” said Kirstin Horn ’21. “I want to organize. I want to help people. I want my work to be about empathy and helping vulnerable people.”

Devin Massari ’21, working with Horn and classmates Dana Chan ’21 and Kataryna Restrepo ’21, on a website to document the class, along with Adler's research and interviews, added, “I’ve learned things and grown. This experience has been so important to me.”