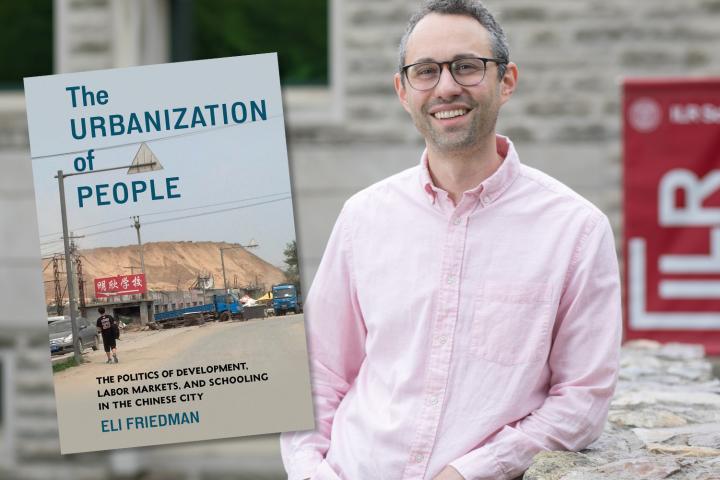 When Eli Friedman set out to write his second book, he intended to focus on the segregated education system in China and how it affected teachers’ work, but quickly found that the project moved in an unexpected direction.

“When I started talking to teachers about their work, it just brought up so many other problems,” said Friedman, associate professor and chair of international and comparative labor in the ILR School. “They talked about normal workplace concerns around wages and working hours, but also the bigger problems that really had to do with a broader social environment and the fact that the government was taking all of these steps to make their lives extremely difficult – both the teachers and the families that they were serving.”

“The Urbanization of People,” to be released in May by the Columbia University Press, reveals how cities in China have granted public goods to the privileged while condemning poor and working-class migrants to insecurity, constant mobility and degraded educational opportunities.

Using the schools as a backdrop, Friedman investigates how the state manages flows of people into the city, often by limiting educational opportunities to the children of “migrants” – rural Chinese that move to the large cities for better work opportunities. There are now nearly 300 million such migrants in China who are living outside of their place of official registration, which means they can be denied access to social services.

“In 2014, the government established this ‘population redline’ of 23 million for Beijing and basically told local government officials that they need to find ways of getting rid of some of the ‘less desirable’ people in the cities,” said Friedman. “And they used all kinds of mechanisms, including relocating labor intensive industries outside of the city, demolishing whole informal settlements, but also demolishing or closing the schools and making it harder for the children of people who are from rural areas to get into public schools within the city and thereby believing, correctly I think, that if the children can't get into schools that the parents will have to leave.”

Through his research, Friedman found that when private schools shut down, migrant parents are left in a precarious position. If the parents are lucky, they might find another neighborhood school to take their children. The other options are to move somewhere else – which can affect their work – or to send the children back to the rural area to live with extended family – which has created the phenomenon of nearly 60 million “left behind children” who are living without their parents.

“You set up your life in a particular way and need it to continue that way,” Friedman said. “And if one of legs of that table falls then everything can collapse. And, so, one of the chapters looks at the effects of these demolitions and what parents do when their children's school is demolished.”

“In talking to a lot of migrant workers for my first project, their biggest concerns were often not what was happening in the workplace, but about getting their kids into school,” Friedman said. “If you have kids, in order for your life to feel stabilized, you need a job and you need enough money to pay the rent, but you also need to feel like your kids have a future in the place that you live. So oftentimes, education was their bigger concern.

“The migrant workers that are the thread that connects these two projects.”