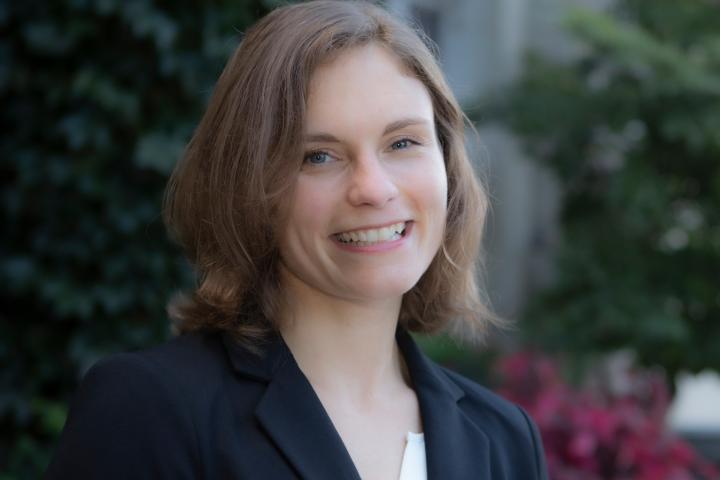 Rebecca Kehoe’s research philosophy is simple – she studies what is “interesting and important.”

Over the past year, that has translated into two published papers, three in-press papers and three more papers under review. Kehoe’s topics range from HR systems overall – such as how a company’s HR practices align with their overall business strategies – to the role of employees in an organization – such as how star performers affect their peers and how boomerang employees fare when they return to an employer.

One of the “rising stars of the field,” according to Associate Professor Christopher Collins, Kehoe initially began her academic career on the other side of campus as an Applied Economics and Management major in Cornell’s College of Agriculture and Life Sciences.

“I really enjoyed all of the AEM coursework, but after four years of classes in econ, finance, statistics and marketing, I felt like I was still missing an important piece of how organizations function,” Kehoe said. “Eventually, I came around to realizing that this missing piece was the people.

“I think that's why a lot of my research comes down to looking at, in different and in indirect ways, how organizations create value through people. My undergraduate major, where I felt something was missing, was all about the strategies and economics of business. I wanted to know about the people who make the organization function. I had an interest in understanding that.” 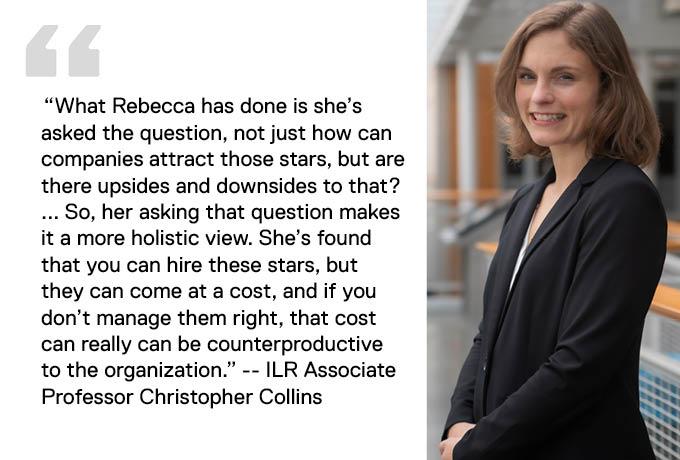 After earning her undergraduate degree in 2005, Kehoe transitioned to the ILR School for both a master’s degree and a Ph.D. in human resource studies. Her initial plan was to study diversity, but an early research assistantship with former Cornell professor Pat Wright, who introduced her to strategic HR as an area of research, and a fortuitous seminar with Collins set her on her current path.

“It was my first fall and I took a micro HR seminar with Chris,” Kehoe said. “And just in having conversations and meeting with him, we started talking about research and I had the opportunity to work with him early in my career. If I’m honest, a lot of this came down to chance. I had also started a diversity project, but it never went anywhere, and since then, half of my career has been in strategic HR research.”

Some of Kehoe’s best-known work, and the topic she continues to focus on, involves “star” employees.

“She took a pretty novel direction in how we think about star employees,” Collins explained. “Star employees are the most productive, the most impactful, and often we think about companies trying to attract more of those. What Rebecca has done is she’s asked the question, not just how can companies attract those stars, but are there upsides and downsides to that? We always think of the positive side of having a star, but there are downsides to it, as well. So, her asking that question makes it a more holistic view. She’s found that you can hire these stars, but they can come at a cost, and if you don't manage them right, that cost can really can be counterproductive to the organization.”

In addition to her continued work around star employees, Kehoe’s recent in-press papers have touched on a range of strategic HR topics.

In “Give Them Some Slack,” Kehoe and her co-author, F. Scott Bentley, found that financial slack helps to support a firm’s strategic change efforts, especially when it pairs with HR slack – or excess employees – and is used to invest in the knowledge, skills and abilities of the firm's workforce.

In “The Goldilocks Effect of Strategic Human Resource Management,” Kehoe and her co-authors examine whether a firm's market entry mode – is the firm a first mover or a later entrant into a new product market – influences the effectiveness of a high-performance HR system.

Kehoe’s paper “Revisiting the Concepts of Vertical and Horizontal Fit in Human Resource Management” will serve as the lead-in to a three-paper symposium where she will discusses current knowledge and potential future directions for research on fit or alignment in strategic HR research.

Finally, in “An Expanded Conceptualization of Line Managers’ Involvement in Human Resource Management” Kehoe and co-author, Joo Hun Han, provide a conceptual review where they integrate research that might be useful for better understanding the role of line managers as agents in the HR process.

The extraordinary amount of work she’s undertaken in the past year was possible, in part, because Kehoe is a star employee herself, Collins said.

“There's a reason we brought her back from teaching at Rutgers,” he said. “She's seen by her peers as being one of the rising stars of the field. I think part of that is the productivity. I also think her ability to be part of all these projects is because other really strong people want to work with her.”

In addition to her many papers and symposiums, Kehoe has taken leadership positions in several professional organizations, including a spot on the executive committee for the HR Division of the Academy of Management.

“That really reflects on her reputation outside the school,” Collins said. “The fact that people vote her into these leadership roles means that people really do see her as a superstar.

“She's making an impact not just with her research, but also how she's impacting the broader group of this academic world we belong to.”