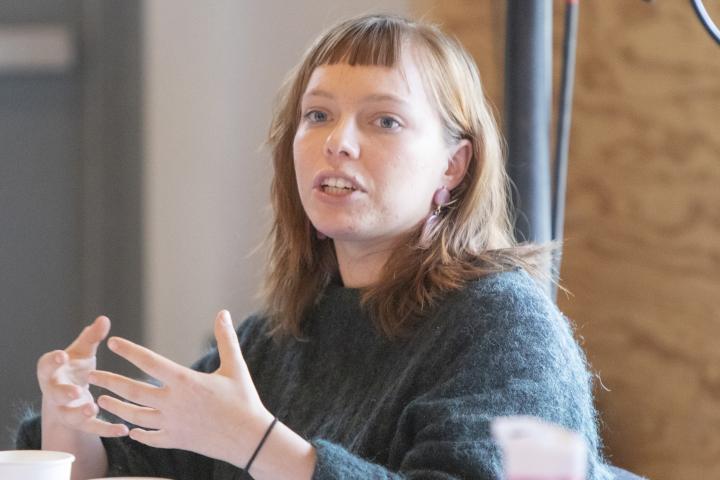 For three years, Althea Brennan ’23 has been part of ILR’s Ithaca Co-Lab work to improve work opportunities for local people.

“This community should be the blueprint of what’s going on in the rest of the country,” she told 30 people who met Friday at the Cherry Arts Space in Ithaca for the “Good Jobs for All?” summit co-sponsored by the Co-Lab and Legal Assistance of Western New York.

Ithaca Social service agencies, worker organizers, academic researchers and other advocates have the potential to build a vibrant ecosystem of support for people who need jobs, said many at the meeting, but the challenges are steep.

Many justice-involved people are denied jobs based on their conviction record, despite a 1974 state law that makes that illegal, said Jason Hoge of Legal Assistance of Western New York.

In May, Danielle Szabo began her job as director of workforce innovation for Ithaca Area Economic Development. Friday’s event gave her a literal seat at the table, she said, to see where community efforts are connected or misaligned.

Ithaca has the highest income inequality in Upstate New York, said ILR Research Professor Ian Greer, M.S. ’03, Ph.D. ’05, Co-Lab director. He teaches “The Fight Against Unemployment,” a course that helps Cornell students such as Brennan learn about the complexities of joblessness and job quality.

Cornell’s David M. Einhorn Center for Community Engagement supports the course, which inspired Jana Alzayer, A&S ’24, to continue her participation in the Co-Lab’s community work. “I’ve gotten so much exposure to the community that’s been so valuable. I want to be a member of a community to help solve problems. I want to be part of that change.” Alzayer plans to apply her Co-Lab experiences to a career as a civil rights and employment lawyer in Saudi Arabia, her home country.

Greer and advocates are discussing a slate of possible new projects on issues such as job quality and helping justice-involved people read and correct their criminal records.

At the summit, ILR Associate Professor Michèle Belot urged community members to tap into ILR resources. “We at the ILR School are here for you.”