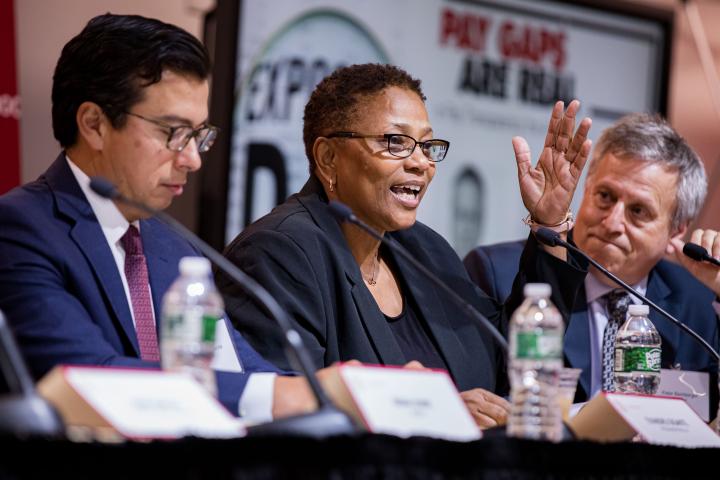 “We should yield to this moment and be flexible and be innovators and … and just get it done,” said Jacqueline M. Ebanks, executive director of the New York City Commission on Gender Equity. “What we're looking for is that the worker is empowered to make informed choices about where they pursue opportunities.”

The law going into effect today in New York City is aimed at closing the pay gap for women, both white and of color, and for men of color. Requiring disclosure of the high and low salary range is an attempt to give job applicants the info they need to decide which jobs they want to apply for and to have the facts to effectively negotiate a salary.

“Employees are saying, ‘I want transparency, I want to know.’ Employers are concerned about getting it right and making sure they don’t do it in a way that creates risk ... It is starting to impact how employers do business,” Gigante said at the Oct. 25 forum. A recording of “Pay Gaps are Real: Is Pay Transparency the Answer?” can be seen here.

Pay transparency can generate conflict with current employees who see postings and question why they’re paid at the low end of the range; some employers compress the range to avoid conflict, said Peter Bamberger ’82, M.S. ’84, Ph.D. ’90. Bamberger is the research director of ILR’s Smithers Institute and author of “Exposing Pay: Pay Transparency and What it Means for Employees, Employers and Public Policy,” slated to be published in 2023 by Oxford University Press.

The event was sponsored by the ILR School’s Labor and Employment Law Program, Institute for Compensation Studies and Center for Applied Research on Work. It was organized by Esta Bigler ’70, director of the Labor and Employment Law Program and director of ILR New York City government relations, and Diane Burton, the Joseph R. Rich ’80 Professor of Human Resource Studies and the academic director of the Institute for Compensation Studies.