“Once in a Generation Moment” Discussed in Webinar 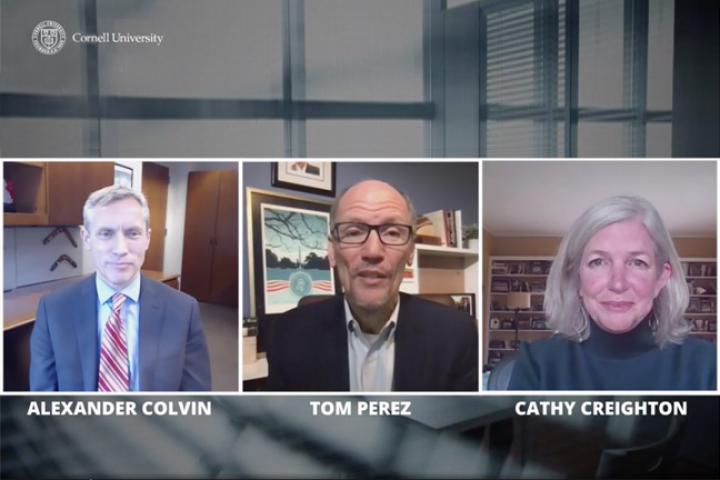 The event, “The PRO Act: Upending the Labor Landscape,” was moderated by Cathy Creighton ’87, director of ILR’s Buffalo Co-Lab, and touched on the first 100 days of the Biden presidency, the rise and fall of union membership, and the proposed Protecting the Right to Organize Act. If passed by the U.S. Senate, the bill would expand collective bargaining rights for workers and reform labor law in ways unseen in decades.

See a replay of the webinar here.

As U.S secretary of labor during the Obama administration from 2013 to 2017 and chairman of the Democratic National Committee for four years beginning in 2017, Perez praised Joe Biden’s first 100 days in office, and stated that the president is leading the U.S. through a historic moment.

“We’re in a once-in-a-generation moment right now,” he said. “I had the privilege of enforcing labor laws at the Department of Labor and the majority of the laws I enforced … were a byproduct of the New Deal. And before that, I was heading up the Civil Rights Division … and most of the laws I enforced were largely a product of the Civil Rights Movement of the ‘60s. These were two eras of great angst in our country. Great division in our country. Great suffering in our country. And great accomplishment. We rewrote the social compact in those two decades on issues of fundamental importance. And I think we’re at another one of those generational moments. And I think Joe Biden and Kamala Harris get it. They understand that this is not a time for the faint of heart … Our goal is to get us where we need to be for decades to come.”

Colvin, the Kenneth F. Kahn ’69 Dean and the Martin F. Scheinman’75, MS ’76, Professor of Conflict Resolution, concurred, explaining that unions thrived in the 1930s because workers felt that FDR was on their side, and drew the comparison to Biden, stating, “It is striking to hear him talk about labor and unions with this clear, pro-union perspective. Historically, that is an important shift.”

The next “Future of Work: Labor in America” will be with Colvin and Noam Scheiber, labor reporter at “The New York Times.”