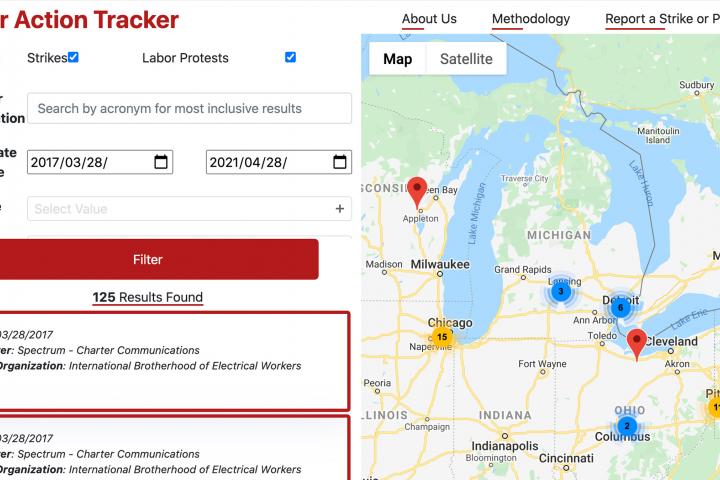 A database of U.S. strike and protest activity that will report hundreds of labor actions across industries and geographic lines will be launched May 1 by the ILR School.

The public, policymakers, academics, journalists and others will have access to details such as worker demands, industry, participant numbers, duration, locale and other variables. Filters will allow, for instance, a search for strikes and protests related to worker concerns about COVID-19 protocols.

The Cornell ILR Labor Action Tracker will enable a better understanding of the scope of labor unrest across the country, as existing data sources have limitations that leave policymakers and academics largely misinformed, organizers said. John Kallas, Ph.D. ’23, is the project lead, Associate Professor Eli Friedman is the academic adviser and Dana Trentalange, MILR ’21, is the project coordinator and social media strategist.

The launch timing was purposeful; May 1 is International Workers' Day, and known as May Day across the world, where it commemorates workers' rights and strikes dating to the 1800s.

Although the U.S. Bureau of Labor Statistics tracks strikes, it only reports work stoppages that involve 1,000 or more workers and that last an entire shift, leaving out most strike activities, Kallas said. Filling that void was the motivation for building the ILR tracker, which will measure labor actions that involve two or more people. It will distinguish between labor protests and strikes, which include work stoppages.

“We are excited that users are able to filter according to certain variables to develop a more specific understanding of strikes and labor protests. For example, users can filter by industry and search for all the strikes and/or labor protests in the health care sector. Users can also use multiple filters at once, which allows for even more specificity in terms of search results. For example, users can search for all the strikes and/or protests in the health care sector in which a central demand of the strike/protest is related to COVID-19 protocols,” Kallas said.

Labor activists and scholars often eagerly await the Bureau of Labor Statistics’ annual work stoppage summary each February to examine strike trends, and many were surprised when the agency reported only eight large work stoppages in 2020, Kallas said. The number underscores that the agency captures only a small number of strikes, he added.

“The bureau provides open access to their methodology and the types of strikes they count, but a narrative is formed around their work stoppage data that is misleading. We have tracked at least eight strikes on our tracker in the past two weeks, never mind an entire year. The development of a comprehensive and rigorous labor action tracker seems important for workers, labor organizations, journalists, policymakers and scholars,” he said.

Kallas continued, “The tracker can also be used by people who do not have a particular interest in labor, or who might not know much about unions or labor organizations. For instance, we recently added two labor protests to our tracker that help illustrate this point. One featured a protest by approximately 2,000 food delivery drivers in New York City, which attracted limited press coverage by traditional news outlets. The other action featured unionized jockey valets protesting for a fair contract at Churchill Downs just a week before the Kentucky Derby.”

Tracker updates can be followed @ILRLaborAction.