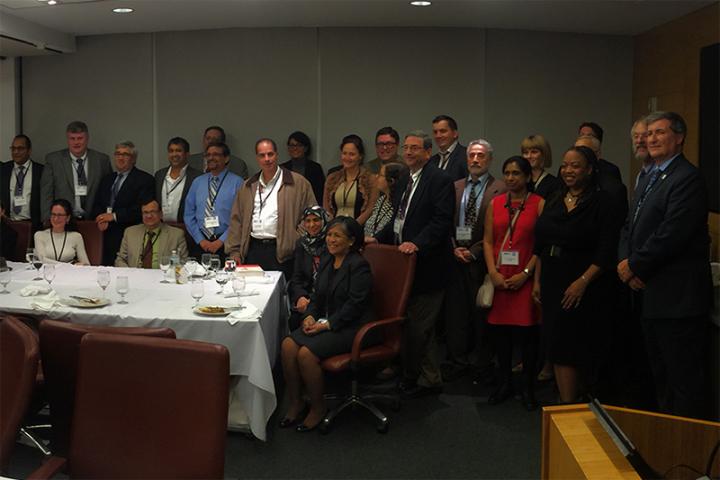 Cornell ILR’s Scheinman Institute on Conflict Resolution has been instrumental in the development efforts leading to a cross-collaborative partnership between NYC Health and Hospitals and its front line clinicians represented by Doctors Council Service Employees International Union.

A three-day training to launch new collaborative efforts began Nov. 4 with hospital management and doctors gathering to begin the process of system-wide change.

The need for such a partnership was at the center of recent collective bargaining negotiations. In the past, clinician engagement in the decision making process was lacking and affecting care, according to Doctors Council. Greater collaboration between frontline doctors and management was imperative to help drive quality improvement in the nation’s largest public hospital system, serving 1.4 million New Yorkers every year.

“We asked our member’s a few years back, ‘what do you want our priorities to be for Doctors Council?’” said Dr. Frank Proscia, President, Doctors Council.

“They told us, in no uncertain terms and almost unanimously, that they wanted Doctors Council to make its top priority to be proactive in quality improvement processes and front line engagement,” he continued.

Doctors Council recruited the Scheinman Institute to survey its members, conduct research and write a white paper that became a “call to action” for Doctors Council and NYC Health and Hospitals to create system-wide and facility-based councils to lead quality improvement and empower frontline doctors.

The white paper was utilized as the centerpiece during collective bargaining talks in 2014-2015 between the two groups.

The result created a joint committee, known as the Collaboration Council, with the goal of developing a united approach between doctors and management to improve the quality of health care.

The three-day training, “Improvement Science in Action” conducted by the Institute for Healthcare Improvement, provided grounding in systems theory and a model of improvement that built a foundation for union and management in a unified approach to health care improvement.

“The work of the joint labor-management Collaboration Council is to achieve measureable and sustainable improvement in the quality, safety and overall patient experience – the key levers in improving population health and reducing cost,” said David Lipsky, Scheinman Institute director and the Anne Evans Estabrook Professor of Dispute Resolution at ILR.

According to Lipsky, the Collaboration Council, the result of collective bargaining, is a valuable breakthrough to be supported and studied by all practitioners in health care and in labor relations more broadly.

“We need more efforts such as this,” he added. “We know that collective bargaining can advance the interests of all parties and directly benefit the community that the parties serve. Cornell University is proud to bring experience and an enormous body of research to support this effort.”

According to Doctors Council, Cornell ILR and Scheinman Institute faculty, researchers and staff have been instrumental in the development of all aspects of the work over the past two years that has led to the agreement and partnership.

At the forefront of the effort since spring 2014 is John August, director of healthcare labor relations at the Scheinman Institute.

“I think what’s really exciting about this work, and why the leaders of Scheinman are so excited, is that they regard this work as central to its mission in that the institute wants to see collective bargaining become a driver of change in outcomes for our communities and for society more broadly,” August said.

“This is a great example of how we can achieve innovation in collective bargaining and labor relations to get at the true drivers of improvement in the workplace. In so doing, a much higher level of employee engagement will be achieved, and labor relations is often not seen as a driver for that,” he said.

“Moving forward over the next year, we will be directly involved in the implementation of the Collaboration Council at the systems level and then at the facility level in what I would call facilitation of dialogue and facilitation of learning about the collective bargaining relationship to performance improvement.”

Through such collaboration, performance enhancements are expected across the board, said Doctors Council president, Proscia.

“The only viable option we had was collaboration. Doctors Council had to work with management and I think NYC Health and Hospitals thought they needed to work with the doctors,” said Proscia.

“We now are no longer on opposing ends of a negotiation table. We’re partners in this together. As far as I’m concerned, the Collaboration Council is a win-win-win,” he said.