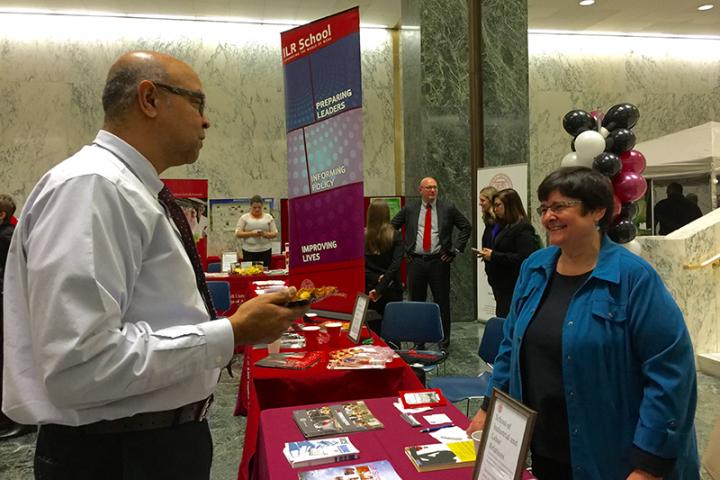 This year’s message about education, discovery and engagement was delivered in a Legislative Office Building section known as “the Well.” Thousands of Albany workers and members of the public walk through the underground hallway every week.

Afterward, she said, “Cornell Day provide an excellent opportunity for ILR reps to familiarize policymakers with the ways in which we ‘advance the world of work’ with our students, in our communities and across the state through both resident and extension activities.”

State Sen. David Carlucci, D-Clarkstown, a 2002 ILR graduate who was the youngest member of the Senate when elected in 2010 at age 29, stopped by the ILR tables.

Fitzpatrick is well acquainted with the school; his daughter, Corina, is a 2004 ILR graduate and is now a college recruiter for Ernst & Young, also known as EY.

Pat Saunders of the Suffolk County Police Benevolent Association and others asked about professional programs, certificates and workshops offered in New York City, onsite and online by ILR and the Worker Institute.

ILR was joined at the event by the Colleges of Agriculture and Life Sciences, Human Ecology and Veterinary Medicine, along with the College of Engineering, Weill Cornell Medicine and Cornell Cooperative Extension.