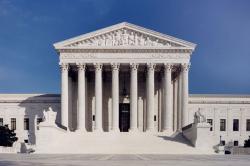 “A number of observers believe that if unions lose this case, they will be weakened financially and unable to play the prominent role they play in electoral politics.”

“Whether they are right will be determined by unions’ ability to explain in new ways their relevance, politically and at the workplace. It will be uphill, but I am betting on them.”

Under Illinois law, members of public sector unions who have gained this right at bargaining automatically have deducted from their paydays the dues they owe to their union. Non-members of that same union have an obligation under state law to pay through payroll deductions only a portion of what the members pay. They are called agency fee payers, or individuals who choose not to join but pay their “fair share,” due to the law;

Illinois public sector worker Bruce Janus asserts that law violates the First  Amendment to the U.S. Constitution each payday, when, in accordance with Illinois law, even though he declined to join the union, he still must pay a portion of his earnings to “his” union to pay for the costs of undertaking the union’s administrative tasks such as bargaining and representation.

“When trying to determine whether a bad Janus ruling will be a knockout blow to America’s trade unions, it is important to review our history. The courts, except for rare instances, have not been union-friendly. One of the first important court rulings in our history was in the early 1800 that found unions were illegal because it was a criminal conspiracy for workers to band together for their own financial well-being.

“Despite the courts, American workers have fought for economic and political justice through their unions and that will continue.”

In the short run, Adler said, most unions, will experience a loss of revenue both from agency fee payers and some members who will ask, “If they must represent me whether I pay for the service or not, why not save my dues monies for myself and my family?”

“In the long run, if Mr. Janus prevails, unions will have to get much better at explaining to their members the value and necessity of paying dues, and learn from their colleagues in the South, who, despite not having the laws that Mr. Janus seeks to abolish, often have 80 to 95 percent of their members voluntarily paying dues.”