A Lifetime of Contributions 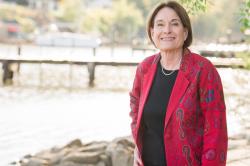 A summer job with the Teamsters after her sophomore year changed the course of her life. Now, Vicki Saporta ’74 is making it possible for others to have that same opportunity.

Through the Vicki Saporta Social Justice Internship Fund, “I hope to encourage students to follow their passions and see the difference they could make by working for a progressive, mission-driven organization,” she said.

Before that transformative summer, Saporta planned to become a lawyer. Afterward, “I couldn’t wait to work with the union. I even graduated a semester early to    do so.”

She spent nearly 20 years with the Teamsters, starting as a representative for the Western Conference. Next, she was an organizer for the international union, “organizing workers in all types of jobs all over the country.”

Although she was on the road more than 200 days a year, “I loved the work and felt so fortunate to be able to do something where I was making a difference in workers’ lives.”

In 1995, concerned that “tactics we had developed to encourage employers to bargain in good faith were being used against abortion providers,” she left to champion a new cause, becoming president and CEO of the National Abortion Federation, an organization she served for 23 years.

“Again, it was a place where I could make a difference – this time, by ensuring women could access safe, legal reproductive health care,” she said.

When hiring for entry-level positions, she recalled, she favored students who had followed their passions and sought out internships. “Knowing that many students can’t afford, or don’t think they can afford, a nonprofit internship, I wanted to level the playing field,” she said.

Since retiring last year, Saporta, a lifelong sailor and former member of the Cornell sailing team, is pursuing another mission-driven passion – working to save the Chesapeake Bay.

She looks back fondly on her ILR days, which exposed her to “women role models like Jean McKelvey and Alice Cook, who worked well past retirement doing meaningful work that made a difference.”

A 1993 recipient of the Groat Award, Saporta has served on the ILR Alumni Association Board of Directors, the ILR Dean’s Advisory Council and the President’s Council of Cornell Women.

Among other awards, in 2015 she received the ACLU’s highest honor, the Roger Baldwin Medal of Liberty, recognizing a lifetime of contributions to civil liberties.