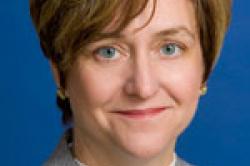 Without a doubt, Beth Florin MS '85 says, "the ILR School prepared me for a successful career in a way that no other university could have."

She also credits the "so what?" factor.

Florin recalls fondly how her mentor, George Milkovich, an ILR professor emeritus, used this response regularly as way to get his students to look deeper at issues and their societal impact.

She and her husband, Joe Rich '80, MS '86, who also studied under Milkovich at ILR, "never forgot it and frequently quoted it to each other and to our employees."

"This simple phrase helped remind us to consider the bigger picture when reviewing analytical information or when tackling a business issue. When I entered the job market, this more strategic focus helped give me more credibility and provided me with additional career opportunities."

On Sept. 22, the school will recognize Florin for establishing the Joseph R. Rich Professorship. The named chair is a tribute to Rich, who died in 2007. It recognizes an ILR faculty member contributing to compensation studies in the field of labor economics or human resource management.

Throughout their careers, Florin and Rich developed a passion for the compensation field, something that took root at ILR in Milkovich's compensation course.

Their attraction to compensation, Florin says, stemmed from an interest in statistics and numbers. "At heart, we both liked math and statistics, as well as the challenge of influencing employees to maximize productivity and performance."

At Cornell, she was introduced to the man who would become her husband. Florin first met Rich when she visited ILR to learn more about the master's program. He was part of a group of current students that met with prospective students to answer questions about the school.

Rich graduated shortly after Florin started her program, but they stayed in touch. Rich, who was working at Data General Corporation, returned to ILR as a recruiter.

After graduating from ILR, Florin joined Data General, where both she and Rich worked as compensation analysts.

"Data General, at the time, was a fast growing organization with limited infrastructure. We were given great opportunities to help build the firm's human resource programs. As an example, Joe developed a very unique automated job evaluation system that the company rolled out worldwide. He did this only two to three years out from graduating. Our Cornell education gave us the skills to do interesting work like this at early stages of our career."

After Data General, they went on to executive-level positions with major consulting firms before founding their own firm, Executive Alliance.

"At the time we founded Executive Alliance, we were still fairly young in our careers, although we didn't think so at the time," Florin says about starting the firm when she was 30 and Rich was 34. Their success, she adds, can be attributed in part to Cornell and ILR.

"Cornell gave us both confidence; that whatever you put your mind to, you can do."

The couple kept their connection to the university over the years as members of advisory councils and as guest lecturers. While running Executive Alliance, they also collaborated with Milkovich to sponsor several compensation research projects.

When Milkovich retired, they started to think about what they could do to make sure compensation remained a focus at ILR. Establishing a professorship seemed like an excellent option.

Florin's hope is that the professorship will provide support for faculty to conduct applied research that practitioners can use to do their jobs more effectively.

"Compensation is a critical human resource function. Every person has a paycheck, every organization has a payroll cost that is a meaningful part of the firm's overall cost structure. The decisions organizations make about pay programs can cost millions or even billions of dollars. There's a need for more research and data to help inform that decision making."

The first Rich Professorship recipient, Kevin Hallock, professor of economics and HR studies and director of the Institute for Compensation Studies, is an ideal choice, she says.

"Kevin epitomizes the type of professor that we hope to encourage. His research topics are thoughtful and forward-thinking in his field. He's an incredibly smart person, a leader within the university, a caring mentor to his students, and a friend to both Joe and me."

When asked what Rich might think about this professorship in his name, Florin comes back to the "so what" factor.