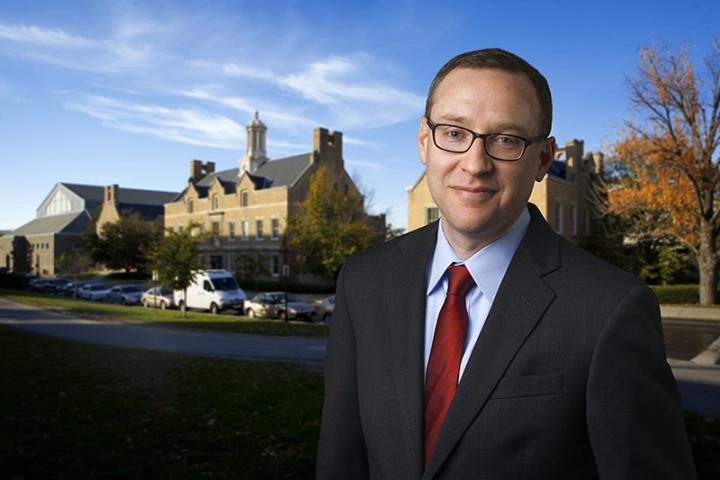 In February, Kevin Hallock began his tenure as the ILR School’s Kenneth F. Kahn ’69 Dean. Hallock joined ILR as a faculty member in 2005, most recently serving as the Donald C. Opatrny ’74 Chair of the Department of Economics and Joseph R. Rich ’80 Professor, and director of ILR’s Institute for Compensation Studies. In this Q&A, Dean Hallock talks about ILR today and shares some of his goals for the years ahead.

Have you always wanted to work in academia?

I think I’ve wanted to be an economics professor since I was in middle school. Even at that time, I was interested in labor markets and why people earned what they earned. I was focused on this early and stuck with it. My father is an academic physicist — he’s worked at the University of Massachusetts Amherst for 45 years. That certainly had an enormous impact on shaping my career interests. He loves his job and I love mine.

Do you remember when you first heard about the ILR School?

When I was in college, I attended a lecture given by ILR Professor Ron Ehrenberg at Amherst College on compensation tournaments in professional sports. During the lecture, I asked a lot of questions. Immediately after, Ron pulled me aside, pointed at me and said, “Want to get a Ph.D. at the ILR School?” He handed me his card. I ended up earning my Ph.D. in economics at Princeton and starting my academic career at the University of Illinois, but I found my way back to Cornell.

What brought you to the ILR School?

In the fall of 2004, my wife and I were having a conversation about where we wanted to be in 15 years. I was happy in my nine years at Illinois, but I also thought the ILR School could be great. The day after that conversation — it was 9:07 a.m., I remember it clearly — I got a call from Professor Larry Kahn, a member of the ILR faculty search committee looking for a compensation specialist. He wanted to know if I was interested.

What have you been learning during your first months as dean?

I thought I knew a lot about ILR before I took over as dean, but I’ve been learning so much more, especially relating to what the students are doing. I knew about our world- Class debate team, but I didn’t know much about other groups, like the mock trial team.  It is a great joy to meet and talk with our students. They are remarkable. I’ve also gained a much greater appreciation for the incredibly dedicated and talented staff and faculty at ILR, and everything they contribute day in and day out.

How would you describe the state of the ILR School today?

ILR is in a really good place due to the hard work of staff, faculty, students, alumni and friends. The work of our former deans has positioned us to make some great advances for the school in the years ahead. The university is facing some budget challenges and ILR, like all the schools, colleges and units, must share in helping to solve these issues. But, we’re hopeful that this is a short-term concern, and I don’t want it to get in the way of moving forward and exploring new opportunities.

What do you see as priorities and opportunities for the school?

Maintaining and enhancing the financial stability of the school is critical. Everything we do should be of the highest quality. If it’s not, we probably shouldn’t be doing it. ILR is fantastic at providing an exceptional student experience, but I’d like to see us doing even more as it relates to the well-being of our students. I’d also like to develop more resources for conducting innovative research and a stronger platform for celebrating our research excellence. We need to keep helping those outside the school — legislators, prospective students and parents, employers — understand what ILR is all about today and how we are advancing the world of work.

Talk about the role of alumni and friends as we move forward.

As dean, I’m excited to have more opportunities to meet with and get to know our alumni and friends. They are so devoted to the school and so willing to share their time, resources and advice with us and with our students. I’d like to get alumni engaging more fully with us sooner after they graduate. It’s good for students to meet with our alums in senior positions who are at the top of their fields, but also to connect with someone five years out, where they could see themselves in the early years of their careers.

In five years, what do you hope to be saying about the state of the ILR School?

ILR is such a great place, and I hope we are doing many of the things we are doing now, and even better. We need to continue replenishing the faculty, since we’ll be facing many retirements in the next five to 10 years. I hope that ILR will be held up as a model for student, staff and faculty engagement, health and well-being. I’d also like to see us doing even more to tackle some of the “big” questions — like inequality — from the multiple disciplinary perspectives of the school.

If you could be working in a profession other than academia, what would that be?
My high school’s “class prophecy” predicted I’d play third base for the Yankees, and that I’d marry my high school sweetheart. One out of two isn’t bad.