Entitlement: More Complex Than You Think 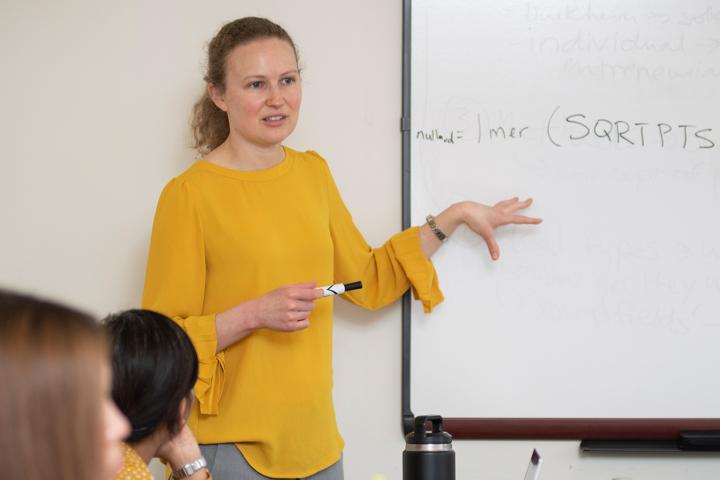 Imagine you’ve been waiting 30 minutes for a table at a restaurant when you notice another diner being seated within five minutes of her arrival. Frustrated, you leave the restaurant and stop at a nearby bakery. Another shopper stands before the bread shelf, eyeing the last loaf of bread. You reach in front of her and take the loaf—after all, you deserve it more than she does; you’ve just been treated unfairly at the restaurant. Wait. What?

You’ve just experienced situational entitlement, a common human behavior, says Emily Zitek, ILR associate professor, organizational behavior. When we’re treated unfairly in one situation, we then act selfishly in another—but why? Intrigued by the question back in graduate school, Zitek pursued it in her dissertation. Until then, entitlement had been seen as strictly a personality trait, but she was the first to show that it can be situationally dependent. “Entitlement is defined as thinking you deserve more than others regardless of what you’ve done,” she says. “Sometimes we can feel more entitled than at other times, especially if we’ve been treated unfairly. Then we’ll do something good for ourselves to compensate for the unfair treatment and balance the scales again.”

Working with a variety of collaborators, Zitek has continued to research entitlement since she joined the ILR School in 2012, making significant contributions to the study of this phenomenon. “Emily’s research has stoked a lot of interest in the causes and consequences of psychological entitlement,” says Alex Jordan, adjunct professor of business administration, Dartmouth University, one of her collaborators on the entitlement research and on other studies. “Her research’s distinctiveness and importance have led to its citation in introductory psychology textbooks, and some of her papers have been cited over a hundred times by other scientists.”

Zitek has joined with ILR graduate Lynne Vincent, assistant professor of management, Syracuse University, and Bruce Barry professor of management/sociology, Vanderbilt University, to investigate how entitlement influences negotiations. “We’re finding that entitlement is good when there’s just one item you’re negotiating, like the price of a house,” Zitek says. “People who are entitled will end up with better outcomes because they’ll push for what they think they deserve.” On the other hand, in an integrative negotiation where many issues are at stake—say a job offer where salary, starting date, benefits and other issues are all part of the negotiation—the person with the higher sense of entitlement does not do as well.

“When many issues are in play, sometimes you have to give and take,” Zitek says. “There are some things that can work for both sides, for instance, a later start date in an employment situation that both sides find agreeable. Entitled people, because of their competitive attitude, are not good at finding these sorts of win-win points, these ways to create value. So, in the workplace, the best people to send to different types of negotiations can depend on their sense of entitlement.”

While entitlement usually gets a bad rap, Zitek doesn’t see it as necessarily negative. “A little entitlement can be a good thing,” she says. “If someone is too low on entitlement, they will be taken advantage of. People can be wrongly accused of being entitled. This can happen when they are fighting for new rights. The accusers don’t recognize why the other people deserve what they are asking for. It’s important to realize that people sometimes need to feel they deserve more. That’s the first step toward getting it.”

Along with entitlement, Zitek has pursued multiple research projects looking at how people respond to positive and negative events. Her investigations have addressed a range of questions, including why people like hierarchies and what that means for business structure, how people respond to rejection, discrimination in the workplace and—building on her longtime interest in sports psychology—the effects of hostile aggression on basketball players’ skill sets during a game.

In the basketball study, she collaborated with Alex Jordan to analyze players who had more technical fouls—things like yelling at the referee, taunting and fighting. The researchers discovered that players exhibiting this sort of hostile aggression also have better playing statistics in some areas, but not in others. “We found they were better at scoring points, getting rebounds and getting blocks, but worse at three-point shooting,” Zitek says. “Aggression is a high arousal state, so being super pumped up is good for power moves, but you can be too pumped for tasks that require fine motor skills, like shooting a three-pointer.”

She carries these findings over into her own sports experience as an avid ultimate Frisbee player. “In my own coaching and captaining experience, I remind people that on defense it’s better to be more pumped up than it is for offense,” she explains. “A lot of times you try to get your calmer players to play the offensive points and your higher energy people to play defense. You can try to match people’s tendencies to their positions and hopefully that can improve your team.”

Zitek originally chose to study social psychology because she saw it as a way to address social problems such as discrimination. “I’m very interested in those kinds of problems, she says. “I thought I could make a difference through my research.

“I decided to study social psychology, in large part, due to the influence of Professor Mikki Hebl at Rice University. I got involved in her research lab early on. Her main research area is discrimination, and she focuses on demonstrating discrimination and trying to figure out how to reduce it. I thought this was a very important research area and a good way to make a positive impact in in the world.”

Zitek hopes to combine her interest in gender discrimination and sports in a future research project looking at how women athletes are treated. “Sports is one of the few domains where it’s still perfectly acceptable and seems reasonable to most people to be sexist,” she says. “People assume a man will be more athletic than a woman. You hear comments like that all the time. The people making them don’t even realize they’re being sexist.”

Zitek mentions tennis star Serena Williams’ much publicized run-in with a referee at the 2018 U.S. Open that cost her a game penalty. “Some people said she was treated unfairly because male tennis players have gone at umpires way worse than she did and not gotten penalized as badly,” Zitek says. “Serena has faced an extreme amount of sexism and racism. She’s been so successful on the court, and that’s made people uncomfortable. You open a news feed on her and look at the readers’ comments on the bottom, and it’s one rude comment after another. It would be nice to see female athletes like Serena get an equal number of internet trolls compared to a male athlete, not more. That would be success.”

“My goal is to increase public discourse and get people thinking about the issues of entitlement, discrimination and hierarchy. In terms of sports, I hope people will stop to consider whether a female athlete is being treated fairly.”