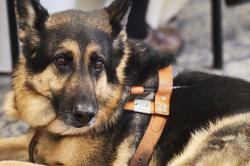 Clear communication is vital to the mission of The Seeing Eye, an organization focused on training dogs to empower their blind human companions with independence, dignity and self-confidence.

Staff and volunteers embrace the same mission, carrying on a tradition that started in 1929 and that has forged 17,000 partnerships between dogs and humans.

But, empowering 28 managers overseeing 150 staff members to see their employees’ point of view and to inspire them is not as easy as the unconditional love dished out by the canines.

So, The Seeing Eye turned to ILR’s Executive Education program.

Lisa Csencsits, associate director of the program, which specializes in leadership development and human resources practices, has worked with The Seeing Eye managers since the partnership began more than three years ago.

“I don’t envy you as managers,” Csencsits told a recent class of managers sitting in a day-long workshop at The Seeing Eye campus in Morristown, N.J.

Managers deal with a range of personalities, so applying a one-size-fits-all approach to a group of employees won’t work, she advised.

From the tone used in addressing staff, taking time to listen to how body language can undermine what is being said and showing empathy – these are some of the actions which managers constantly need to evaluate in their actions, Csencsits said.

“To be a confident communicator, you need that self-awareness,” Csencsits said. “You have to know your audience. You have to conscientiously think about how you phrase things to people or risk killing their motivation and creativity.”

A successful manager will know how to tailor his or her interactions in a way that best reaches each member of their team, she said.

“So the ability to treat others the way they want to be treated versus the way you want to be treated – this all stems from the desire to build and nurture the most effective work relationships and to communicate in a way that eliminates as much misunderstanding as possible.”

For Jim Kutsch, president and CEO at The Seeing Eye, the payoff has been a drop in turnover. While acknowledging that many factors can account for improved retention, “It’s often said that the top reason that employees leave a job is because of a bad manager,” he says.

“Our staff turnover for the past several years has been at historically low levels and we think improved management effectiveness, aided by annual training, has played a role,” Kutsch says.

The Seeing Eye trains 500 puppies every year. About 75 percent who undergo the specialized program graduate.

Dogs who don’t make the cut are placed with law enforcement, search and rescue teams or put up for adoption. German shepherds, Labrador retrievers, Golden retrievers and Lab/Golden retriever mixes are the primary breeds used.

There are now about 1,750 humans paired up with The Seeing Eye dogs. All training is done on campus, where first-time students train for 25 days and returning students train for 18 days. After a dog retires, the student returns to train with a new dog. Students can choose to keep their retired dog as a pet as they transition to a new working dog.

The Seeing Eye has fine-tuned its breeding and training program to produce dogs who not only listen and obey commands, but also are able to evaluate orders and decide if what they are being told to do is safe, Kutsch said.

Kutsch, who lost his vision at 16 in a chemistry accident and three years later came to The Seeing Eye, is up to his eighth dog, Vegas, now six. By 23 months, Seeing Eye dogs start to work; they generally retire around age 10, though that is up to each individual graduate.

“They use intelligent disobedience, meaning the dog has to solve problems and know when the command it is asked to do is inappropriate and should be disobeyed,” Kutsch says. “Our dogs are taught to problem solve.”

Humans, for better or worse, are a lot more complicated.

Tuition for first time students is $150 and $50 every time the student returns. Military veterans pay one dollar.

Tuition includes training, transportation, room, board, equipment and any follow-up with The Seeing Eye, which gets the bulk of its funding through individual and corporate donations, foundations, bequests and other designated gifts.

So what have The Seeing Eye managers learned from their four-legged friends that they can use with their employees?

“Probably to be consistent and to assume good intent from the other person,” Kutsch says. “Dogs thrive when expectations are clear and consistent. They are also known for offering unconditional love. Not a bad thing.”