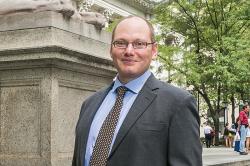 The ILR School and the Aspen Institute Future of Work Initiative Thursday launched the Gig Economy Data Hub, an online resource to help increase understanding of the gig economy and its workers.

"The data hub will be a one-stop shop for all information related to the gig economy,” said Associate Professor Louis Hyman, director of ILR’s Institute for Workplace Studies and its Future of Work research and programs.

Hyman has been collaborating with the Aspen Institute for the past year to establish the data hub.

"While we hear about the gig economy in the news, it is often difficult to get concrete numbers. This data hub will solve that problem."

"Before we can create useful policy, we need useful numbers. The data hub will help journalists, policymakers and citizens get the information that they need," said Hyman, a historian of work and business. His book on the rise of consultants, temps, freelancers and day laborers will be published this summer.

With clearer information available through the data hub, policymakers can better design policies that reflect the changing nature of work, impact millions of gig economy workers and influence the nation’s economy.

Hyman and Aspen are developing engagement events that help the public and policymakers interpret emerging data about the gig economy. On June 7 in Washington, D.C., they will discuss the U.S. Bureau of Labor Statistics’ 2017 Contingent Work Supplement.

The report is the first release since 2005 of government data on contingent and alternative work.

The new data hub is designed provide precise, centralized information on the gig economy and its millions of workers, who include website designers Etsy sellers, house cleaners, dog walkers and many other professions.

The hub will gather, clarify and communicate data sources, including public, private and academic research. It is designed for users who are looking quick answers or for in-depth analysis.

The initiative focuses on policy solutions at the federal, state and local levels to improve economic security for traditional and independent workers. It is designed to encourage increased investment in worker training and education, and give workers tools to succeed in the new economy.

The Aspen Institute Future of Work Initiative is a nonpartisan effort to identify concrete ways to address the challenges American workers and businesses face due to the changing nature of work.