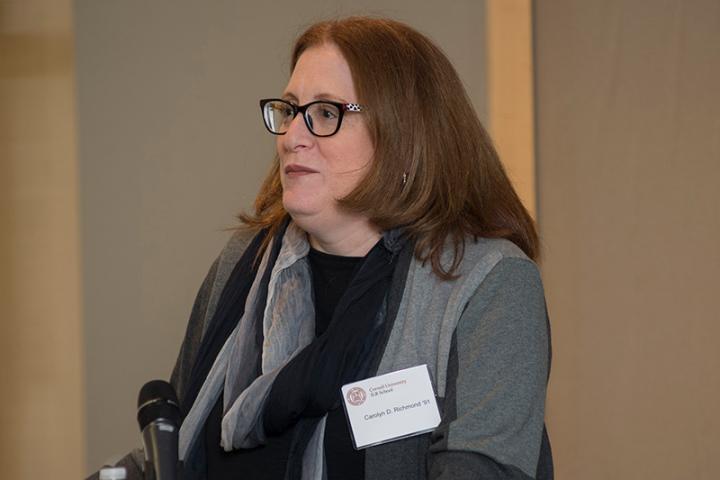 Sexual harassment awareness has grown more in recent months than it had in decades, speakers said at the ILR Women’s Caucus “Toward an Equal Workplace Summit” on Saturday.

Carole Rapp Thompson ’56, one of several alumnae who shared their perspectives in King-Shaw Hall to a crowd of nearly 100 people, said that, upon graduation, most Cornell women of the 1950s became housewives, teachers or personal assistants due to societal norms.

She broke from that expectation by taking the federal service entrance exam, working in Washington at the Bureau of Labor Statistics, first as a labor economist and later as a computer programmer. She transferred to the United Nations in New York, where she went on to become the director of Electronic Services, and, ultimately the director of General Services.

“In the 1950s, sexual harassment was not acknowledged in the workplace,” Thompson said. “Nobody came forward. If they did, it was just shrugged off.”

Things have changed dramatically since then, especially this year and in late 2017 through the #MeToo and #TimesUp social media campaigns. But many questions remain, Thompson said, including: “What do we need to do and how are we going to do it?”

Lydia Varón MILR ’19, who attended with Thompson and is her first cousin, twice removed, added, “People are really standing up together.”

ILR Women’s Caucus Vice-President Linda DePaolis ’19 said the panel accented a number of learnings for her. “Don’t be a bystander, speak up and advocate. Know it’s a legal issue and be aware of your rights."

Steven Bramwell ’18 said, "Men need to be part of the solution. HR professionals are making progress, but we have to still really pay attention to where the harassment line is drawn."

Lauren D. Myers ’97, head of People Ops, dv01, said, “When it comes to developing policies, it can be difficult for HR to determine where the line is drawn for protecting the company and employees or policing the actions of a few.”

“You want to make sure you are advocating and protecting the employee, but you also need to make sure you have policies and discussions around what is not acceptable behavior in the workplace and sometimes outside of the workplace.” She further stressed that “an employee's intent to make a joke or be funny is not how the intended recipient may perceive it- and that is what matters.”

Carolyn D. Richmond ’91, a partner in Fox Rothschild LLP, told students that there is growing demand for investigations of sexual harassment in the workplace and urged students to consider workplace investigation as a career path. “We need third-party investigators.”

Unfortunately, some companies, she said, weigh the risk of a sexual harassment lawsuit against the value of an accused person who may be a high producer for the company.

She also noted that contract workers and consultants are not covered by the federal anti-discrimination laws that cover employees and it is left up to state and local legislatures whether to cover them in the workforce--or corporate policies.

Following the alumnae panel, Liz Karns, an ILR senior lecturer, spoke about the hidden costs the victims of sexual assault endure. A derailed education and career can cost a victim millions in lifetime earnings, she said.

Ninety-eight percent of college campus assaults are not reported, she said. Sexual assault has been normalized by our culture, she said.

Juries don’t protect the victims and neither do other institutions, Karns said. “The backlash against victims in enormous.”

The #MeToo and #TimesUp campaign opened the conversation publically and lawsuits are helping drive awareness of wrongdoing, she said. “What’s effective is litigation. You sue and behavior changes, litigation is a powerful tool.”

Karns also credited the power of social media to bring awareness to the issue and noted that this awareness and support of victims can lead to change. She encouraged students to keep using platforms such as Twitter and Facebook to keep fueling the movement.  “Change the world, she told students. “You go do it!”