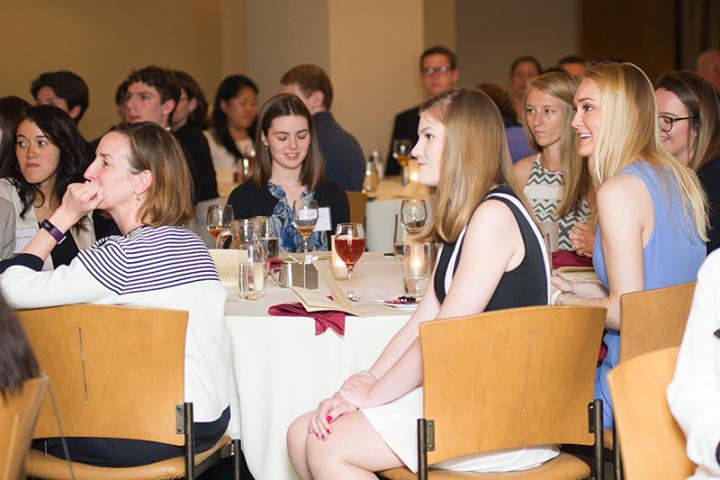 Seniors who are candidates for the “graduation with honors” designation, which requires completion of a thesis, were also acknowledged.

Faculty awards were based on student nominations and supporting letters.

The event is named after James E. McPherson, assistant dean and director of the Office of Student Services at ILR from 1983 to 2002. He also served as director of teaching from 1996 to 2002.

Recipients of awards are:

Seniors who are candidates for graduation with honors, and titles of their theses, are:

Anthony Conte
“ʽAnd Accessibility for All:ʼ How the Tech Industry is Responding to the Needs of Individuals with Disabilities”

Carly Gibbons
“Work-Life Balance and its Impact on Core Relationships”

Emma Keteltas
“Family Leave Policy in the US and the UK: The Influence of Political Structure on Legislation”

Julia Krupski
“Working Through Representations of Disability:  Intersections of Industrialization, Labor, and Disability in Victorian Literature”

Jonathan Levitan
“The Halls of the Kremlin or the Shop Floor: Examining the Schism in the Russian Labor Movement and its Consequences”

Danielle Sosa
“Rhetoric and Violence at the Lawrence — Textile Strike”

Sherry Tanious
“Technology and the Externalization of Work: An Econometric Analysis”