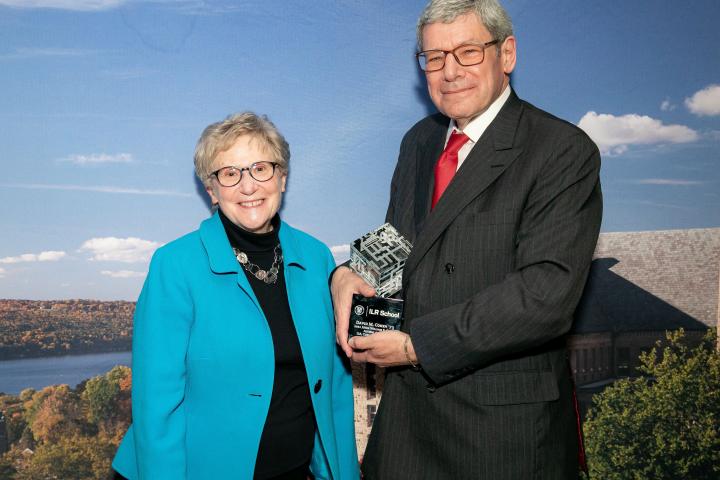 A $3 million endowment from David M. Cohen ’73 and Abby Joseph Cohen '73 will establish a new professorship in labor relations at the ILR School.

“This is an investment in the future of the school … We cannot thank you enough for this incredible gift,” said Alexander Colvin, Ph.D. '99, ILR’s Kenneth F. Kahn '69 Dean and the Martin F. Scheinman '75, M.S. '76, Professor of Conflict Resolution, said when the gift was announced April 28 at the school’s annual Groat and Alpern Awards celebration.

David Cohen, who served as chief negotiator or chief labor counsel in national and New York City roles in multiple industries, made the announcement as part of his remarks after receiving the school’s Groat Award for his achievements and service to ILR at the 400-person event at The Pierre in New York City.

“My ILR education has given me a lifelong set of tools,” Cohen said, to navigate a workplace redefined by the decline of unions, advances in technology, globalization, workplace legislation and COVID-19.

Although the world of work is unrecognizable from the workplace that existed when he graduated from Cornell, “What we used to call industrial democracy is still a necessary and vital part of what every worker should enjoy. Unions created the American middle class and the undermining of organized labor has contributed to income inequality and social unrest,”

Cohen, who has served ILR for decades as a Dean’s Advisory Council member, guest lecturer, faculty research supporter and student mentor, among other roles, said the endowment is an additional way to repay his debt of gratitude. “The school needs great faculty to teach great students,” he said. “This new professorship will allow the school to recruit and retain top talent and to expand the size of the faculty centered around the areas in our field which have been so important in my career.”

The Cohen professorship – focused in one or more areas of labor relations, including collective bargaining, labor law, labor history and dispute resolution – was announced in the midst of a historic time of change in labor relations; thousands of Amazon and Starbucks workers have voted to unionize in recent months. Many see the surge as the possible rebirth of the American labor movement.

Cohen, who met his wife, Abby Joseph Cohen, now a presidential councillor, in an economics class in 1969, credited Professor Emeritus David Lipsky with setting him on a career path that led to roles with the New York City Police Department, Long Island Railroad, Columbia University and other organizations. As a student in Lipsky’s collective bargaining class, he was selected to serve as the contract negotiations notetaker for the superintendent of the Deposit (N.Y.) School District, an experience that “changed my life.”

“I thank Professor Lipsky for pointing me down the path to an interesting, challenging and rewarding career and for being my mentor and friend all of these years.”