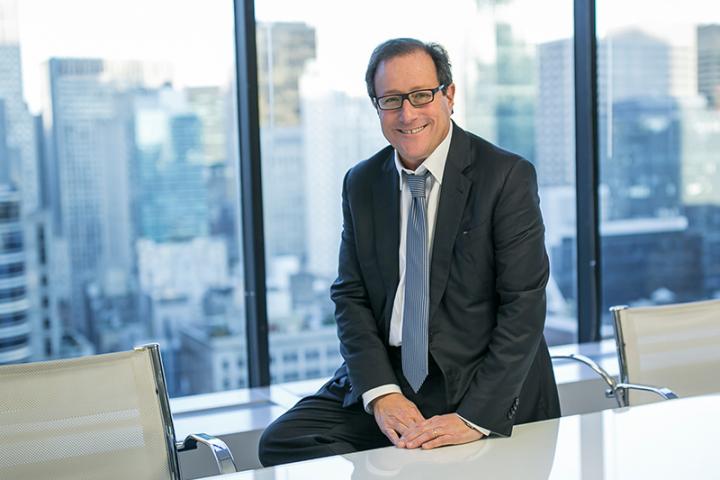 A product of the public-school system in Long Island and a life-long New Yorker, Glenn August ’82 is a happy man. “Looking back, if you would have asked me to fast-forward the clock, I couldn’t have asked for more,” said August in an interview at his offices on the 27th floor of the Grace Building in midtown Manhattan.
August is the founder and chief executive officer of Oak Hill Advisors (OHA), a leading alternative investment firm with approximately $33 billion in assets under management. The firm is world renowned for its industry-focused investment platform, which affords their clients the ability to work with a single partner across multiple investment types and geographies. OHA is based in New York City and has approximately 300 employees in seven locations around the world, including international offices in London, Sydney, Hong Kong and Luxembourg.
August was recognized by the ILR School as the recipient of the 2018 Jerome Alpern Award for his accomplishments outside the field of industrial and labor relations. “I am truly honored and humbled to receive this award,” he said.
August recalled that in his sixth-grade signature book, Cornell was listed as his “dream school” and he knew from an early age that Cornell would play an important role in shaping his future. “I remember the first week at Cornell, sitting in front of Uris Hall on a beautiful, sunny fall day, clenching the grass and saying to myself, ‘I can’t believe I’m actually here’ and being very excited to start.”
August approached his time at Cornell with the same optimism and intensity that he has approached his career. He joined the Cornell student government and was elected as the freshman representative in his first year. In that same year, he made the decision that he was going to pursue an, as yet uncharted, accelerated path of receiving a B.S. and an MBA in four years. He worked hard to complete his undergraduate requirements at the ILR School so that he would be eligible to apply to Cornell’s MBA program and he was accepted to begin in his third year. August also was chosen for the national honor society Mortar Board and served as treasurer of Quill and Dagger, a prestigious, non-academic honor society.
Always looking for the next challenge, during his third-year spring semester, August applied to Harvard Business School and was accepted. He was able to graduate from the ILR School and complete the first year of his MBA studies at Cornell in only three years.
“When I look back, I feel incredibly grateful to Cornell for enabling me to pursue my own individualized plan,” he said. “Instead of saying ‘no, you can’t do this,’ they worked with me to make my path possible.”
When asked about the impact that the ILR School has had on him, August said, “ILR is an amazing background for life, especially if you’re in a business where you work with people.” He continued, “It really helps you understand people, behavior, communications, organizational structure, motivations and empathy — a very unique combination for any school.”
An intensely private person, August does not spend much time talking about himself. A simple Google search that yields a sparse set of results confirms his low-profile approach to a successful and happy life. “I like to focus on the outcomes and give other people the credit they deserve.”
August has been happily married for 23 years and has four children, ranging in age from 20 to nine. He lives in New York City and has served on nine corporate boards and three not-for-profits. His days are filled with work and family.
August serves on the ILR Dean’s Advisory Council and is also a mentor to Dean Kevin Hallock. Recalling the impact that August has had on his personal and professional life, Hallock said, “Glenn is an absolutely remarkable and brilliant person. He is tireless in his devotion to his family and his work. He is also the quintessential triple threat as an alum who shares his time, resources and advice with Cornell. I am particularly grateful to Glenn for all of the time he has shared with me. He makes you feel like your issue is the most important issue in the world.”
“If you would have asked me to fast-for­ward 38 years from my first day of college, I couldn’t have asked for more,” August said when asked if he had any regrets. “I celebrat­ed my 30-year anniversary at my firm this past summer and I feel incredibly fortunate that I love what I do every day. I feel like I just finished halftime and I genuinely hope to work for another 20 or 30 more years.”
Tags
New York City