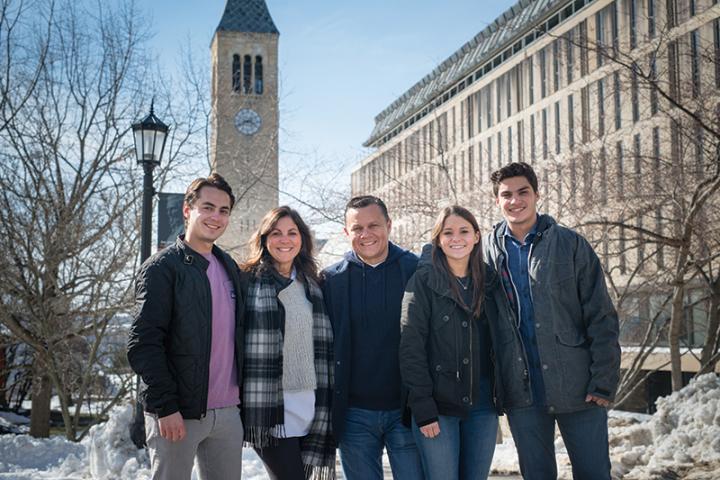 Russell Hernandez ’88 will always be an ILRie at heart.

“The ILR School is the only school I know of that is built like a family,” he said. “The professors, administrators and students are close, and it feels like a small school in a big university. That’s an important part of a quality education.”

The Westchester County, N.Y., real estate developer is an alum who is eager to help, whether it’s videotaping a reminder to his fellow ILR alums about Cornell Giving Day or going behind the scenes to help students prepare for careers.

“If a professor or administrator asks me to help a student, I’m on the phone with the student, talking to them about their resume and career options,” he said.

“Fortunately, I have been exposed to many industries in addition to real estate — entertainment, sports, hedge funds — and I can get these students some great opportunities.”

The son of a Bronx plumbing and heating contractor, Hernandez is the founder and president of Atlantic State Corp., a Pound Ridge, N.Y., construction management and owner’s representative company with about 70 employees.

“I grew up around the construction industry, and I remember the tension between union and non-union workers in the 1970s and ’80s in New York City,” he said. “The ILR School taught me the broad perspective on how union and non-union employees work, and how to bridge the gap between them effectively.”

Professors David Lipsky and Harry Katz were influential faculty. “They shaped my academic career. I thought I was too smart to have to learn anything, but they engaged me and made me want to do the work.”

Hernandez’s first job was as a non-union contractor in the construction industry. “I can’t tell you how much respect I received from the union construction companies and delegates because I was an ILR graduate.”

Today, he has two children at Cornell and a third eager to attend. Gabriel is a senior in the ILR School who will start in July as a real estate analyst and manager with a New York City company.  “Gabriel chose the ILR School because of its diverse course options, especially the law and economics classes,” his father said.

Daughter Serena, a sophomore in the College of Human Ecology, is a human development major planning to help children in need. Daniel, a high school junior, wants to work in the sports industry.