Professors Combine Methods and Expertise to Increase Understanding Around Inequality 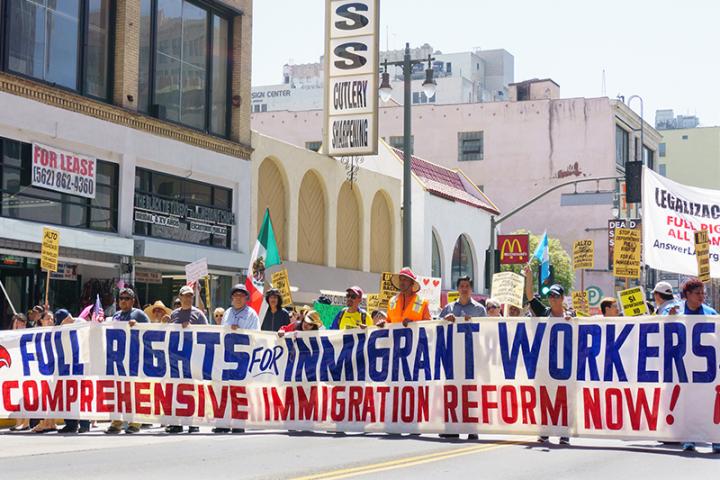 Immigrants come to the United States in hope of a better life, often seeking fair employment to support themselves and their families. Yet, employment laws and immigration laws often collide, placing some immigrants in danger of deportation. “When it comes to things like workers’ rights—health and safety in the workplace, wages and discrimination protections—the U.S. system relies on people coming forward with a complaint,” says Kati Griffith, ILR associate professor of labor and employment law. “Immigration intersects with that. Working immigrants have certain rights, but if you’re not supposed to be here under immigration law, then there’s a tension between one system that’s trying to push you out and another that’s trying to ensure you’re OK in the workplace.”

Since 2016, Griffith and Shannon Gleeson, an associate professor of labor relations, law, and history at the ILR School, have collaborated on a research project focused on immigrants and the effects immigration status has on their workplace experiences. “We’re interested especially in how people think about their rights at work and how their status either facilitates or makes it harder for them to come forward to make claims on those rights,” Gleeson says.

Griffith and Gleeson’s study looks at workers who fall into one of three immigration statuses: workers who are legal permanent residents, unauthorized or undocumented workers, and workers with Temporary Protected Status (TPS) which allows them to legally live and work in the United States temporarily. With the help of Patricia Campos- Medina from Cornell’s Worker Institute and research assistants based in the New York City region, they have interviewed Haitian and Central American workers—especially those from El Salvador. “We picked these groups because they are key groups who have been granted TPS, a humanitarian relief status given to people from countries that have experienced political strife, or a big national disaster like an earthquake,” Griffith says. “The status is supposed to be temporary, until things get better in their country and they can go back.” Yet, the program was renewed for years, and beneficiaries have remained in the United States, building families and settling into communities while regularly renewing their TPS.  The Trump administration has placed the TPS program in its crosshairs, creating enormous uncertainty and fear for TPS immigrants and their families, the researchers said.

“Most other studies on immigration focus on documented versus undocumented immigrants,” Gleeson says. “We also focus on this third category: TPS. We’re not so much interested in saying ‘this is better or this is worse’—rather, we are asking, ‘What are the distinct challenges that get introduced into the workplace when workers have temporary immigration status?’”

Griffith and Gleeson are part of a growing number ILR School faculty members researching and teaching about immigration. Their collaboration combines their unique disciplinary expertise. Griffith is a law scholar with an interest in legal and policy questions. Gleeson is an empirical researcher with a background in sociology and demography. They have an academic home in common: the study of law and society, a hybrid sub-field that develops theoretical and empirical understandings of law, and how it operates on the ground.
“We combine our methods and expertise,” Griffith says. “I bring the complexity of the legal system itself and how it operates. I can get into the nitty-gritty of the legal dilemmas and the policy implications of what we’re doing. Shannon connects our project to broader theoretical questions and debates in sociological studies of inequality. She also brings social science methodology to our research design – such as sampling and interviewing – these are not in my area of expertise, but they’re necessary to do this kind of project.”

“We really complement each other,” Gleeson agrees, “and that opportunity to collaborate across disciplines is a unique aspect of ILR.”

Griffith and Gleeson’s project has already received more than $135,000 of funding, which allows them to support research assistants in conducting time-intensive fieldwork. The project will take years to finish. So far, their team has conducted 120 interviews in Haitian Creole and Spanish with TPS beneficiaries in the New York City area. They are beginning interviews with two additional groups: undocumented Haitians and Central Americans, and legal permanent residents and naturalized citizens from each community. They are still analyzing data, though their preliminary findings reveal that “immigration law and enforcement matters especially to undocumented workers, but having temporary status doesn’t mean you’re fine,” Griffith says. “There’s a different kind of precarity or marginalization that those with TPS experience. For instance, they often fear that they will be easier to round up and deport, as compared to their undocumented counterparts, because they are ‘in the system,’”

The research also highlights some aspects of immigration that policymakers, immigrant advocates and researchers should be aware of. “We need to think about the ways in which immigration serves as a barrier to workers’ rights,” Griffith says. “Policy solutions should reduce the obstacles to workers’ individual and collective claims making by separating immigration enforcement from workers’ rights enforcement.”

Policymakers want to create greater equality, to prevent people from having to linger in precarious workplace conditions, but current immigration policy actually ends up doing the opposite, Gleeson says. “In this increasingly punitive arena of immigration enforcement, we’ve found that there are spillover effects to other categories of workers besides undocumented workers,” she explains. “For those with a temporary reprieve from deportation, like those immigrants with TPS, the negative impacts are heightened even further because every 18 months, they have to renew their status, which requires them to come forward and reveal themselves again, not only to their employers but to the authorities.”

Griffith and Gleeson, who are affiliates of Cornell’s Worker Institute, hope their findings will highlight the limitations of “fixes” that only allow people to stay in the country temporarily and that fail to consider the workers’ rights consequences of immigration policies. These kinds of solutions come with all kinds of emotional and practical problems for immigrants and encourage unfair employment situations. Eventually, the two want to write a book exploring the issue aimed at a broader audience. So far, they have published several papers based on their preliminary findings, which have garnered some attention from immigrant and worker advocate communities.

“Their recent publication on TPS has great added value to the field,” says Cathleen Caron, executive director of Justice in Motion, a nonprofit that seeks to protect the rights of migrants across borders. “I think people assumed, as I did, that workers with temporary protected status had much less fear and much less inhibitors to be claims makers, to go ahead and enforce their rights in the workplace. But Kati and Shannon have put their work out there like a beacon—saying, even TPS holders are afraid and have things that prevent them from bringing forward labor-related claims.”

Rajesh Nayak, deputy director of the National Employment Law Project, a legal advocacy group dedicated to improving the lives of workers in the United States, also sees Griffith and Gleeson’s research as pointing the way to better policy decisions for advocates and policymakers alike. “Their work shows that this isn’t just about whether or not immigrants are authorized to work, that indeed, some workers with temporary status face high burdens to claiming their rights, as well,” he says. “That’s an important point to remember and to correct for in policy, given that most immigration reform plans over the last decade have dramatically ramped up temporary visa programs.”

Griffith has an interest in immigration issues that stems from her childhood. Three of her great grandparents were immigrants. “I’ve always been this person who wants to be on the side of the underdog,” she says. “It’s important for us to remember how many of us have immigrant backgrounds, at a time when there is so much backlash against immigrants. I have also come to appreciate how the immigrant experience can intensify the vulnerability of workers earning low-wages.  For example, an accent can too easily become a trigger for discrimination.  When I went to law school at NYU, the Immigrant Rights Clinic further inspired me. We brought claims on behalf of immigrant workers, and we worked with community and advocacy groups to connect these claims to broader efforts for social justice.” Griffith never looked back. She continued her involvement in labor-related immigration issues, working as an attorney representing low-wage workers before transitioning to academia.

Gleeson, too, is concerned about those who are marginalized. “This area of interest that Kati and I share aligns with important convictions I have around equity,” she says. “This project is a way to understand how inequality functions in the current moment. Immigration is a lens that helps me discern the role of the state, both in creating greater equity and, as we see here, creating greater forms of division and inequality.”

Ultimately, Gleeson hopes the project findings will help support the work of immigrant and worker advocates. “We should not be so siloed in how we do immigrant advocacy—undocumented folks over there, TPS folks over there—but we should try to find common ground,” she says. “We need to see that, across the board, we’re losing out in the absence of a comprehensive solution that provides people with a pathway to permanent citizenship and effectively protects workers’ rights, regardless of immigration status.”