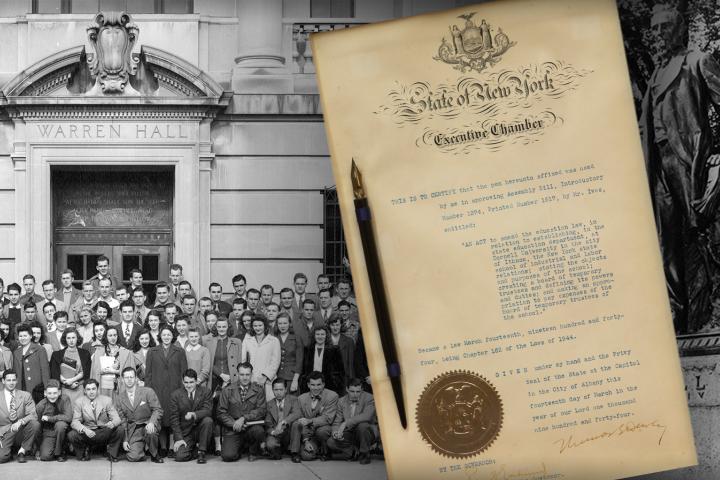 Irving Ives had a daring and controversial dream – build a school that would serve labor, management and the public.

There was no precedent for a higher education institution that would build leaders to bring workers and managers together to solve problems. There were no buildings, no students, no professors, no research mandates. There was nothing.

Ives was bold, though.

From there, he drove the idea of what would become the ILR School.

There were rough patches along the way. Many in the farming, political and labor communities scoffed. Some Cornell trustees were uneasy about the proposed school, which Syracuse University and Union College were fighting to locate on their own campuses.

Seventy-five years ago, on March 14, 1944, Gov. Thomas E. Dewey made the New York State School of Industrial and Labor Relations official by signing legislation establishing an institution to carry out this mission: “improving industrial and labor conditions in the State through the provision for instruction on and off the campus, the conduct of research, and the dissemination of all aspects of industrial, labor, and public relations affecting employers and employees.”

Teaching, research and education. Seventy-five years later, the mission of the school remains fundamentally unchanged. ILR continues the work of bringing labor and management to a table where both are equally valued. More than 13,000 students have been prepared at ILR for careers at the intersection of workplace and societal issues.

In 1944, when Ives’ brainchild became a reality, the nation was emerging from years of devastating economic depression. Unemployment in New York state had risen above 20 percent in the 1930s. After World War II, the state’s economy soared. Thousands of factories made the Empire State a manufacturing giant, but wages were falling and tensions were rising. In 1946, millions of workers went on strike.

The ILR School, with Ives as its first dean, had a lot of work to do.

Cornell President Day, writing in the “Industrial and Labor Relations Review,” recounted the early days. “Those first few months of the new School were hectic, indeed. We had to get an administrative staff. We had to recruit a new faculty from top to bottom. We had to select a student body. We had to organize a body of instruction. We had to find improvised quarters in other University buildings. Most important of all, we had to explain ourselves, for in certain quarters there were doubts about the wisdom of our undertaking. As I look back on those days I wonder that we made out as well as we did. We certainly could not have done so if the capacity of the guiding personnel and the morale of the entire group had not been high.”

In 2020, ILR will celebrate the 75th anniversary of the school’s first classes.

On Nov. 5, 1945, 107 students began their studies in Warren Hall, where ILR borrowed space until it moved into a Quonset hut and seven former military barracks.

Eight decades later, four generations of leaders have been prepared to think critically about difficult workplace challenges and to drive societal impact that improves the lives of people.

Irving Ives would be proud.