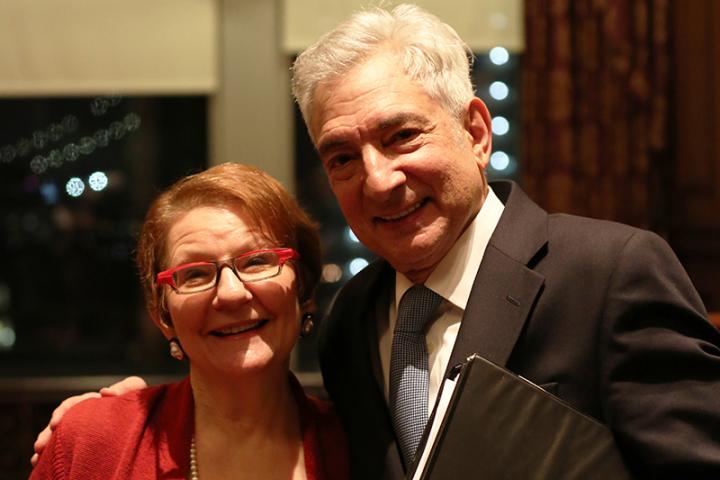 A conversation between two ILRies, Judge Richard M. Berman, U. S. District Court for the Southern District of N.Y., and Esta R. Bigler, director of the ILR Labor and Employment Law Program, about Judge Berman’s decision in the Brady Deflategate case led to March 7 program, “Arbitration: Where It Is Headed.”

Arbitration has become the vehicle of choice for employers and companies when employees or consumers seek redress for issues ranging from discrimination to overpayment of a cell phone bill.

Fans of arbitration hail it as an efficient and less costly alternative to the courts, but is it justice, some ask.

At the panel sponsored by ILR’s Labor and Employment Law Program, the District Court for the Southern District and the Second Circuit Judicial Council,. Berman said that the U.S. Supreme Court’s conservative majority has embraced an “activist” bent favoring arbitration during the past decade.

Esta R. Bigler explained that arbitration in the collective bargaining context is very different from employment and consumer arbitration under discussion at the program.

She said that union and management attorneys are familiar with the process; they jointly choose an arbitrator and pay for the arbitration and they all know they will see each other again.

That is not the case in non-union employment and consumer arbitration where its’s often a large company against a single employee or consumer. The arbitrator is paid by the company and may be picked again by the company for another case.

Panelist Kenneth R. Feinberg,   one of the country’s leading and most sought after arbitrator and mediator, said the problem with arbitration often comes down to the attorneys involved in the process. What should be in theory a good alternative to court, often takes too long and becomes too complex.

The best example of arbitration that Feinberg participated in, he said, involved a case between the estate of the man who unintentionally filmed the assassination of President John F. Kennedy.

Thirty-six years after Abraham Zapruder made the recording on a home movie camera, his heirs learned in 1999 how much the film was worth in an arbitration hearing at which the government fought to buy the film.

Robert Bennett, lawyer for the Zapruder family, called only two witnesses -- auction experts from Sotheby’s and Christie’s -- to attest to what the film would fetch at auction.

The government wanted to pay $1 million, while Bennett argued for $30 million based on the testimony from his auction experts. With Feinberg as one of the three arbitrators on the panel, they voted 2-1 to award Zapruder’s heirs $16 million.

The takeaway from that experience is that Bennett kept it simple by introducing two strong witnesses from competing auction houses. The whole arbitration process took three days.

Stephen P. Younger, partner at Patterson Belknap Webb & Tyler and past president of the New York State Bar Association and a commercial litigator, asked, “by moving cases that ought to be in the court system into a private forum … is what you get in these processes true justice?”

“Mandatory arbitration clauses have become ubiquitous for consumers and appear as fine print on documents such as credit card and bank account statements. So, the question is whether the process is fair and whether the clause is prominent enough for consumers,” Younger said.

“This is what I call the clicking trend, where you go online and accept that new version of Microsoft Windows,” he added “You click on the agreement … and you have agreed to arbitrate.”

Younger remains a proponent of the process, noting that it can limit discovery, motion and hearing requirements typical in traditional courts.

But, he stressed, it’s important to have sophisticated parties on each side who know how the process works and who are willing to accept final decisions. Finding an experienced arbitrator is also crucial.

Another panelist, Theodore V. Wells, Jr., partner at Paul, Weiss, Rifkind, Wharton & Garrison, said arbitration is preferred by his clients as a way to limit liability and potential reputational damage since the rulings are kept secret.