Cornell University’s Vision and Goals provide the framework for ILR’s focus on creating a community that values and advances diversity, equity and inclusion.
Originally published in About ILR.

Junior Advocates for Peers with Disabilities 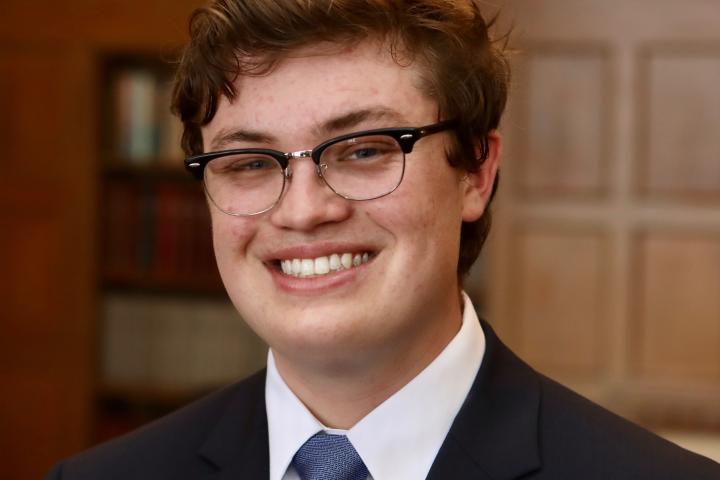 Duncan Cady ’23, who serves as the Cornell Student Assembly students with disabilities representative-at-large, is pursuing several projects aimed at advancing disability justice at the university this semester.

In an interview with ILR, Cady said that he is motivated to increase the inclusion and visibility of Cornell students with disabilities in his work in the Student Assembly, the Disability Awareness Union at Cornell and in partnerships with other student organizations—especially as a student with disabilities himself.

As co-founder and co-president of Cornell’s Union for Disability Awareness, Cady said that he looks forward to implementing several winning project ideas from the Student Assembly-funded accessibility case competition fund: increasing lighting around campus and increasing crosswalk visibility for people who are visually impaired, and increasing accessible campus infrastructure developments for students with disabilities. The Union for Disability Awareness will partner with the Cornell Intellectual Property & Ethics Club to begin the projects, among other disability-centered initiatives, such as expanding CULift Program to include Rideshare services.

As a student with learning disabilities, Duncan said his work in affecting change on campus is not the responsibility of just one person or one organization, but is a collaborative effort to make Cornell more accessible. Among his roles in these organizations, Cady wants to mobilize others toward disability justice even more, such as by including more students with disabilities in decision-making processes. “I’m just one student with disabilities, I’m just one voice in this. And I’m not the only person going through this path of life.”

Growing up in San Francisco, Cady recalled the inherent disadvantages people with disabilities faced in education and access. Diagnosed with mild ADHD and a severe form of dyslexia that affected his cognitive processing and ability to read and write, Cady said he felt “less than” his able-bodied counterparts, and discontent with the lack of support for students with disabilities in “special education” classes.

However, once he gained access to disability-focused education, Cady said that he began to reframe how he saw disability – not as a challenge or disadvantage, but as a strength and gateway to resilience. Cady, recognizing his fortune in accessing disability-based education and accommodations, then became involved in student activism, student government and advocacy organizations to secure more rights for people with disabilities.

“A lot of my story is a lot of being fortunate and privileges to addressing disability that not a lot of people may have,” Duncan said. On my baseball team, I had a good friend from my [previous] public school who also had dyslexia, was the same age, and was a smart kid. But he was in a 50-student classroom and was consistently dismissed and unaccommodated in class. It wasn’t fair that he was more doomed or severely more disadvantaged than I was [at that] time.”

Cady said that his main goal as a disability advocate is “to build up the community around [students with disabilities], and look to community members for community-based solutions on what actions we can take to improve student experience, access to resources, and institutional support for all.”

For example, in considering Cornell community feedback on Zoom learning and the impact of the pandemic on students with disabilities in particular, Cady stated that he wants to increase video and audio capabilities in the classroom, and possibly integrate closed captioning for Zoom-recorded lectures.

Moreover, Cady said that he aims to reshape the university’s approach to disability justice to make “ability-based accommodations more accessible.”

Through the Student Assembly, Cady hopes to strengthen students’ relationships with Cornell’s Student Disability Services. Not only does Cady champion for “[m]ore communication, more outreach and easier interactions” on part of Student Disability Services, but he hopes to “increase funding relevant to improving lives of students with disabilities, as well as the broader Cornell community.”

Cady said he intends to use his role in the Student Assembly to allocate more funding towards initiatives that support students with disabilities—such as Neurodiversity at Cornell, the Students Helping Students fund and EARS.

When asked what his motivation was for becoming an advocate for disability justice, Cady replied, “It’s personal, really. I’m a student with disabilities, and I’m a voice, and I have experiences similar to other students of disabilities … so together we can work to build the college experience we deserve to have.”