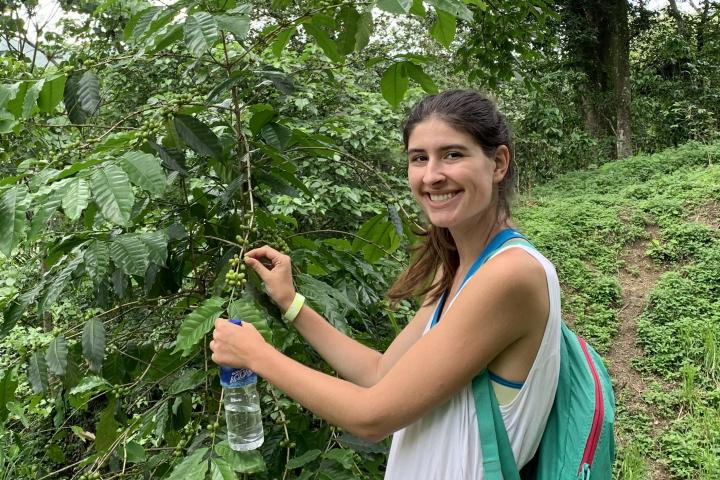 Over the winter break, I traveled to Dili, Timor-Leste to conduct fieldwork for my honors thesis to understand how a United States Agency for International Development (USAID) project intended to promote economic development in Timor-Leste by expanding the coffee industry has affected the lives of local coffee farmers. This specific USAID project created a new coffee cooperative in Timor-Leste, called Cooperativa Café Timor. The Timorese coffee farmers in the cooperative sell unprocessed coffee cherries to CCT representatives. CCT then processes the coffee cherries and exports them to international buyers. My research project was inspired by readings from my coursework and professional experiences, which have focused primarily on different areas of international development. Through these experiences, I have noticed a hesitancy to critique development interventions even though there are often more failed development projects than successful ones. This research project combined my interest of development, entrepreneurship, global supply chains, and my love for coffee to further my understanding of the impact of development projects — particularly those spearheaded by the United States and its development agencies.

While in India last winter break working for the Swami Vivekananda Youth Movement, I was able to see just how impactful and inclusive community-based approaches to development are. Since then I have continued to question why development agencies, such as USAID, fail to measure the success of their development projects not measured in terms of community impact. These organizations always talk about improving individuals’ lives, but the individuals most impacted by the projects are almost always never given a voice. I was particularly interested in this USAID project because it solidified a new trade relationship between Timor-Leste and the U.S because CCT exports about 60% to 70% of its coffee to Starbucks. However, while this relationship has clearly benefited the U.S. and Starbucks, my research showed that it has not benefited local Timorese coffee farmers. During my time in Timor-Leste, I visited two of the main coffee growing regions, Ainaro and Ermera, and conducted interviews with coffee farmers in these regions. Despite being recognized as one of the more successful USAID projects, the CCT Cooperative has not done much to raise farmer incomes and lift them out of poverty. I was particularly frustrated when seeing how the relationship born out of this project further stratify the relationships and inequalities between Western countries like the United States and low income countries like Timor-Leste.

While in Timor-Leste, I was also able to meet and interview the country’s United Nations Regional Coordinator as well as a policy analyst at the Food and Agriculture Organization. Through these interviews, I established valuable connections to top development leaders in Timor-Leste, and I learned the United Nations agencies have not been involved in implementing this USAID project. I also got the opportunity to interview one of the project managers of the CCT Cooperative who gave me a tour of the main CCT coffee processing plant in Dili.

Timor-Leste is one of the least visited countries in the world, which made the experience that much more exciting, but also presented its own unique challenges. The biggest challenge that I faced while in Timor-Leste was navigating Dili itself. For example, Dili has limited options for transportation, and I would often have to take a taxi instead of public transportation, which was considerably more expensive. Public transportation consisted of small mini buses and when I asked my translator if there was a map that showed the route each bus took she responded by saying “No, we just learn the routes from our parents, there is no map or bus guide.” Additionally, since I did not speak the national language, Tetum, it was difficult to communicate with the Timorese. In fact, Tetum is not even available on Google Translate. I was so incredibly grateful for my translator, Margarida Rosa Felix da Costa, a local university student, who organized all of our field visits to the different coffee growing regions and showed me some of the famous sights in Dili. I would not have been able to complete this research without her; and I learned so much about Timorese values, culture, and traditions by working with her. However, everyone I met, especially the families that I interviewed in the rural villages were so incredibly welcoming and generous. For example, while in Timor-Leste, it was monsoon season and one of the first nights in Ainaro, my translator and I were conducting an interview when we were caught in an extreme thunderstorm. It was almost pitch black outside and the roads had no lighting, which made it too dangerous for us to go back to our housing accommodations for dinner. Without hesitation, the family we were interviewing let us stay in their home until the rainstorm passed, and they graciously made us dinner as well.

I was genuinely so surprised to see how many course topics regarding development that I have learned about Cornell were so salient in Timor-Leste, particularly this idea of the linearity of development. I found that this project has not significantly affected the incomes of Timorese farmers or improved their standards of living. The prices that farmers receive for their coffee from CCT are incredibly low and are not much higher than the prices farmers received from the Indonesian government when Indonesia occupied Timor-Leste and monopolized the country’s coffee industry. In addition, the cost of living in Timor-Leste has drastically risen since Indonesian times, thus farmers are not able to buy as many goods with the money they receive from CCT. This USAID project is reflective of a typical approach to development, however, while growing the coffee industry may have help raise Timor-Leste’s GDP; it has not had as much of a positive impact on the lives of Timorese coffee farmers. After completing my thesis, I hope to utilize these findings to advocate for a change to the CCT project so that farmers are able to a more fair payment for their coffee. This experience would not have been possible without the support of my friends, family, and faculty members who supported and encouraged me along the way. I also want to thank the ILR International Programs Department for helping my research to come to fruition through the International Travel Grant.