Working in Buffalo: An Ode to the Possible 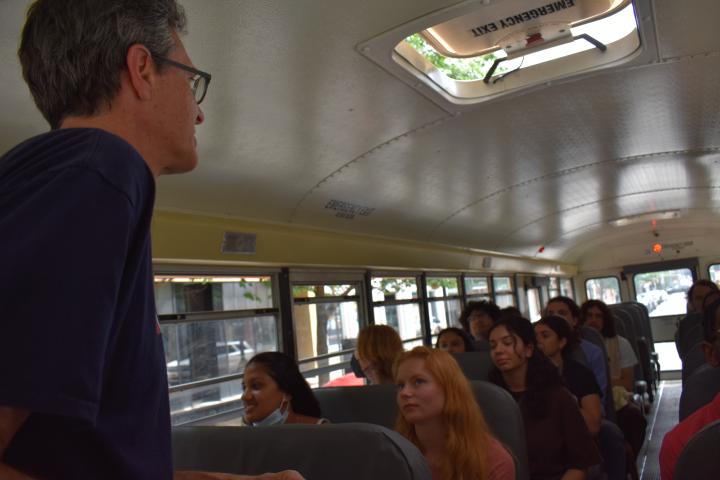 The East Side of Buffalo is ringed with vacant lots so populous that they seem to form their own parkways — but they are not like the tree-lined boulevards landscaped and designed by Frederick Law Olmstead, celebrated as green sanctuaries within the concrete city. Instead, the greenness of the East Side lots is more skeletal, more reminiscent of death. When one drives past them, the grasses almost seem to whisper of the homes, grocery stores, and places of worship that were there before; they seem to tell of divestment in the predominantly Black East Buffalo community, to mourn the remains of a largely abandoned subset of the city.

While on a bus tour of Buffalo’s East Side with other fellows, Sam Magavern says, “What do we do with vacant lots?” He asks, “What are the basics of a neighborhood? A park, a school, a place of worship, a tavern, a store.” He highlights a Rent-a-Center, an Aaron’s, a bank turned into a pawn shop. He says that every neighborhood has strengths and assets, and the question is simply how to capitalize on them.

What do we do with vacant lots?

Perhaps we can believe that they are not only spaces for cemeteries, but also for gardens. Perhaps though a lonely East Side field is retrospective in nature, it also looks toward the future — it asks these vital questions, which are tinged with hope and possibility: What will be here next? How can we build it?

I think that in our discussions of the East Side, and Buffalo as a whole, my peers and I must keep the possible in mind. In fact, I believe the work we’re doing here in Buffalo is an ode to the possible. It is acknowledging systemic inequities that led to segregation, divestment, blight, transportation differentials, and health imbalances, but also refusing to accept these scourges as immutable. It is looking at an empty East Side lot, grown over with tall grasses, dandelions, purple clover; silent except for the wind and perhaps the papery sound of snakes slithering low over the soil — and seeing a grocery store, a garden. This work, above all, is the incredible opportunity to contribute to the regrowth that East Siders and community organizations have already begun; it is the privilege to participate in this communal dreaming, hoping, building, answering: What do we do with vacant lots?