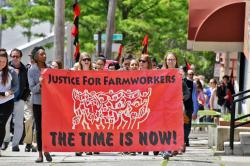 In a decision handed down by the Albany Supreme Court on Jan 3rd, 2018, a 2016 lawsuit filed by the New York Civil Liberties Union on behalf of Crispin Hernandez was dismissed. The decision upheld a provision in the New York State Employment Relations Act (SERA) that exempts agricultural workers from the right to organize and collectively bargain. This post will serve as a review of the history and the implications of this decision.

Agricultural workers, or farm workers, exist in a uniquely precarious position across the United States. They suffer from low wages, insecure employment, lack of safety, and inability to organize. They are abused and exploited in farms across the country and lack the legal protections to fight back. The global advocacy firm Polaris released a report that named agricultural work as one of twenty-five sources of human trafficking. The report contends that agricultural contracts promise hourly wages but instead pay on a piece-rate basis. This reality entraps workers in these positions, offering them little financial stability to resist. It further details the squalid living conditions that workers are forced to endure due to fears about deportation or immigration status. According to a report by the Fair Food Standards Council, the US Department of Labor describes farm workers a labor force in significant economic distress.

Farm workers have lacked legal protections from the very beginning. In 1935, they were considered exempt from the National Labor Relations Act, which granted protection to workers who chose to organize and collectively bargain for better working conditions. While farm workers can and have attempted to unionize, they are at the behest of their employers and can be fired for engaging in organizing. Farm workers are also excluded in significant ways from the Fair Labor Standards Act (FLSA), as they have no right to overtime pay and minimum wage protections. According to National Farm Work Ministry, FLSA exemptions mean that children as young as twelve can legally work in the fields.

The New York State Employment Relations Act (SERA) was modeled after the NLRA and shares its farmworker exemption. As a result, farm workers in the state have been engaged in a protracted struggle for the right to organize without fear of repercussion. Several attempts to include farm workers under SERA protection have been introduced to the New York State Legislature, but they have all failed. Despite this, unions and workers centers have rallied together to try and fight for these workers. Among these organizations are the New York Civil Liberties Union, the Workers Center of Central New York, and the Worker Justice Center of New York. These organizations are all listed as plaintiffs in the lawsuit filed on behalf of Crispin Hernandez.

Crispin Hernandez was a dairy worker at one of the largest dairy farms in New York, Marks Farms LLC. While employed, Hernandez repeatedly dealt with volatile and unsafe working conditions. When he attempted to meet with co-workers about possibly organizing, he was seen by his employer and promptly fired. As a result, Hernandez lost his job and his home. Hernandez joined with the NYCLU, WCCNY and WJCNY in bringing a lawsuit against the state of New York and Governor Andrew Cuomo. The lawsuit contended that exemption of farm workers from labor protections violated the equal protection and due process clauses under the New York Constitution. It was also argued the law was discriminatory because of its history as a Jim Crow law. Farm workers at the time of the law's inception had been overwhelmingly black, and the exemption was crafted to appease racist politicians who looked to restrict blacks from New Deal labor reforms.

The state defendants did not answer the complaint and in fact expressed support for the plaintiff's argument. The court would have settled in the plaintiff's favor if not for the intervention of the New York Farm Bureau. Pursuant to NY CPLR §103, the Farm Bureau's motion to intervene was granted and they sought to dismiss the complaint. The Farm Bureau argued that collective bargaining would create significant hardship for farmers due to the seasonality of their labor forces, the perishability of their products, and the low prices farmers receive for goods. They stood behind the legislative history of the exemption, which had remained intact despite attempts to repeal it for the past twenty years.

Supreme Court Justice Richard J. McNally, Jr. explained in his decision and order that the court was only obligated to apply the will of the Legislature, rather than its own perception of what might be equitable. He furthered charged that any changes to the SERA must be done legislatively rather than through the court. In addition, he found the plaintiffs were unable to demonstrate that the law was racially discriminatory or that farm workers were a constitutionally protected class. As a result, the motion to dismiss the complaint was granted. While farmers might find this ruling worthy of rejoice, the reality is much bleaker for New York's farm workers. They will continue to lack crucial labor protections available to other workers. The NYCLU promised to appeal the decision, as it has far-reaching implications that affects a marginalized community of migrant workers.

The question of farming and agricultural work is fundamentally one of immigrants' rights. According to the latest National Agricultural Workers Survey, 68% of hired farmworkers interviewed in fiscal years 2013 to 2014 are immigrants from Mexico and another 4% were born in Central America. It is critical we take this into account when examining the policies and laws regulating their workplace. Migrant laborers from these countries already suffer from increased scrutiny and racialization. Furthermore, many must live in constant fear of deportation and other immigration-related issues. Because of these factors, they are essentially trapped in these poor working conditions and forced to endure various forms of exploitation.

The Hernandez decision marks yet another slight to farmworkers, who have already endured generations of exploitation. Exemptions like those in SERA exacerbate an already very precarious existence for migrant laborers. These holdover laws from the Jim Crow era continue a legacy of racism and disenfranchisement of minority populations. Advocates for the farming industry are clearly prioritizing profits over the wellbeing of the workers who are essential to our agriculture and food production systems. Until these inequities are addressed, farm workers cannot hope to receive the fair treatment and working conditions they deserve. As advocates for labor rights and protections, it is essential we support these organizations in their appeal of the decision.