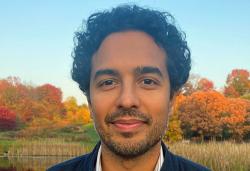 Tejasvi Nagaraja is Assistant Professor of History at Cornell University’s ILR School. He received his Ph.D. from New York University, and has held fellowships at Harvard University, the New School and the New York Historical Society. His writing has been published in the journal American Historical Review.

Nagaraja’s research and teaching explores the intersections of U.S. labor and African American and foreign relations history. Investigating both ‘top-down’ public policy and ‘bottom-up’ social movements, his work considers how class, gender and race evolve within a changing global division of labor and geopolitics. As a scholar of empire, he interprets the United States both in and of the world, across both connection and comparison, especially through a focus on war and the military. As a historian of labor and racial capitalism, he finds the study of social movements particularly illuminating. In addition to labor and working-class history, Nagaraja’s teaching has highlighted the Black freedom movement and U.S. wars, including interdisciplinary courses on global capitalism, on race and war — as well as, gender and geopolitics; the military- and prison- industrial complex; freedom struggles in geopolitics; intersectional and international social movements.

Nagaraja is writing a book about America’s World War II experience and generation. It reconstructs a far-flung war within the war, among Americans themselves. This transnational story braids military-industrial labor battles, Black soldiers’ protest against policing and incarceration, and veterans’ debates about America’s role in the world. Diverse war workers led a ‘greatest generation’ of labor, Black freedom and other social movements, which linked racial and economic and global contentions. These struggles took place from Pennsylvania to Panama, Georgia to Germany, Michigan to Manila. From WWII into the Cold War, U.S. foreign policy’s statecraft was entangled and embattled in relation with domestic social movements, which were themselves embedded within the new global war machine. This process took shape amidst a singular peak momentum in the organization and intersection of the U.S. labor and Black movements, as they intersected with a singular peak momentum in the organization of U.S. global military power. As Americans today grapple with the overlapping trajectories from New Deal to neo-liberalism, from Jim Crow to a prison-industrial complex, from American primacy to a military-industrial complex—this book finds the WWII generation’s war-within-war to be critically foundational and revealing.