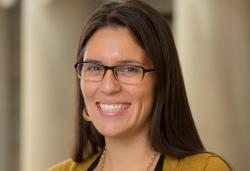 Shannon Gleeson is associate professor of Labor Relations, Law, & History at the Cornell ILR School. She earned her Ph.D. in Sociology and Demography from the University of California, Berkeley and was previously on the faculty of the Latin American & Latino Studies Department at the University of California, Santa Cruz. Her books include Accountability across Borders: Migrant Rights in North America (University of Texas Press, 2019, edited with Xóchitl Bada), Building Citizenship From Below: Precarity, Migration, and Agency (Routledge, 2017, edited with Marcel Paret), Precarious Claims: The Promise and Failure of Workplace Protections in the United States (University of California Press, 2016), The Nation and Its Peoples: Citizens, Denizens, Migrants (Routledge, 2014, edited with John Park), and Conflicting Commitments: The Politics of Enforcing Immigrant Worker Rights in San Jose and Houston (Cornell University Press, 2012).

Additionally, she is engaged in various collaborative projects that examine the implementation of immigrant worker rights. With Xóchitl Bada, (University of Illinois, Chicago), she is researching the role of the Mexican Consulate in protecting the rights of immigrant workers, and the perspective of enforcement agencies and nonprofit advocates across the United States. With support from the National Science Foundation, she and Els de Graauw (Baruch College, the City University of New York) are conducting an institutional analysis of the implementation of the 2012 Deferred Action for Childhood Arrivals (DACA) program in three metropolitan regions: the San Francisco Bay Area, the Greater Houston Area, and the New York City Metro Area. With Kate Griffith (Cornell University), she is also examining the effects of temporary immigration status on worker legal mobilization in New York City.