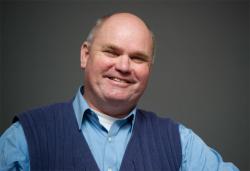 Attended the University of Southern California on a debate scholarship and graduated in 1984. Upon graduation was selected by the Speech Communication Association's (SCA) Committee on International Discussion and Debate (CIDD) to represent the US on debating tour of New Zealand. Returned to US to take job as assistant debate coach at Cornell under the then supervision of Cornell's Director of Forensics, Pam Stepp. Received Juris Doctorate and Master's in Speech Communication from Syracuse University. Subsequently, taught debate and other speech communication courses at the University of Vermont, SUNY Geneseo, Syracuse University, the University of Rochester and currently Cornell. I also presently serve as Cornell's Director of Speech and Debate (formerly known as Forensics).

I try to democratize the classroom and try to learn as much from my students as they learn from me. I believe the critical communication skills that students take away from classes help make it easier for them to reach their professional and academic goals.

My research focus is on critical thinking, advocacy, and public speaking and the intersection between all three.

The Speech and Debate Program at Cornell has become a resource hub not just for students on campus but for the community at large. We believe sharing our skills, knowledge and experience is both a privilege and a duty.