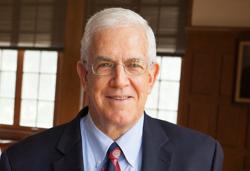 Ronald G. Ehrenberg is the Irving M. Ives Professor of Industrial and Labor Relations and Economics at Cornell University and a Stephen H. Weiss Presidential Fellow. He also is Director of the Cornell Higher Education Research Institute. From July 1, 1995 to June 30, 1998 he served as Cornell’s Vice President for Academic Programs, Planning and Budgeting.

Ehrenberg served as an elected member of the Cornell Board of Trustees from July 1, 2006 to June 30, 2010. Governor David Paterson nominated him for membership on the SUNY Board of Trustees in May 2009. His appointment was confirmed by the New York State Senate in March 2010 and he served on the Board until June 2017. He chaired the Board's Academic Affairs Committee and was a member of its Executive, Communications and External Affairs, Finance and Administration, Research and Economic Development, and system wide provost search committees. He received a B.A. in mathematics from Harpur College (SUNY Binghamton) in 1966, M.A. and Ph.D. in economics from Northwestern University in 1970, an Honorary Doctor of Science from SUNY in 2008, and an Honorary Doctor of Humane Letters from Penn State University in 2011. A member of the Cornell faculty for 45 years, Ehrenberg has authored or co-authored over 160 papers and authored or edited 26 books.

Ehrenberg was the founding editor of Research in Labor Economics, and served a ten-year term as co-editor of the Journal of Human Resources. He has served, or is serving, on several editorial boards and as a consultant to numerous governmental agencies and commissions and university and private research corporations. He is a research associate at the National Bureau of Economic Research, a research fellow at IZ A (Berlin), was a member of the Executive Committee of the American Economic Association, chaired the AAUP Committees on Retirement and the Economic Status of the Profession, and is Past President of the Society of Labor Economists. He also chaired the National Research Council's Board of Higher Education and served on its committee on Gender Differences in the Careers of Science, Engineering and Mathematics Faculty Measuring Higher Education on Productivity and Research Universities committees, on the NACUBO Endowment Advisory Panel and on The College Boards Rethinking Student Aid Study Group.

Currently, he is a Fellow of the Society of Labor Economists, the TIAA-CREF Institute, the American Educational Research Association,and the Labor and Employment Relations Association; a member of the National Academy of Education; and a National Associate of the National Academies of Science and Engineering. The Society of Labor Economists presented him with the Jacob Mincer Award, in 2011, for lifetime contributions to the field of labor economics. In 2013, the Association for the Study of Higher Education presented him with the Howard Bowen Distinguished Career Award for advancing the field through extraordinary scholarship, leadership and service. In recognition of all of his achievements and contributions to Cornell University, in 2014 Cornell honored him by creating the Ronald G. Ehrenberg Professorship in Labor Economics position at the university. In 2015, he awarded the Glenn G. Bartle Distinguished Alumnus Award from the Binghamton University Alumni Association. In April 2018, he was named a recipient of the SUNY Chancellor’s Award for Excellence in Faculty Service.

Ehrenberg has supervised the dissertations of 51 Ph.D. students and served on committees for countless more. He is also passionate about undergraduate education, involves undergraduate students in his research, and has co-authored papers with a number of these undergraduates. In 2003, ILR-Cornell awarded him the General Mills Foundation Award for Exemplary Undergraduate Teaching.In 2005, he was named a Stephen H. Weiss Presidential Fellow, the highest award for undergraduate teaching that exists at Cornell.

My primary teaching interest is the economics of the university class where I talk about the various resource allocation decisions that Cornell must make and then bring in high level university administrators to talk about the issues they are facing.

Selected Works is a service of BePress Publishing that helps readers follow a scholar's most current work. View Selected Works of Ronald Ehrenberg