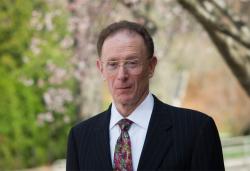 Michael Evan Gold was born, reared, and educated in California. He attended elementary and secondary school in San Jose, received a bachelor of arts degree from the University of California at Berkeley, and completed his formal education with a law degree from Stanford. Thereafter he served for three years as a Peace Corps Volunteer in Liberia, West Africa; in the first year he taught mathematics and English in a junior high school, and in the next two years he taught Civil Procedure and Evidence in the law school of the University of Liberia. After an additional year living abroad, he and his family returned to California.

Prof. Gold then practiced law for three years with Schwartz, Steinsapir & Dohrmann, a firm representing labor unions and individuals in Los Angeles. Although much of his time was devoted to advocacy in arbitrations, he also litigated cases in employment discrimination and union democracy. While practicing, he served as a part-time instructor at the U. of San Fernando Valley College of Law, an independent law school in Los Angeles; he accepted an appointment to its full-time faculty and taught courses on remedies, civil procedure, and employment discrimination law. He also served as an arbitrator in a labor-management dispute.

Prof. Gold presently teaches Labor and Employment Law; Employment Discrimination Law; Ethics at Work, which is an introduction to ethical philosophy; and American Ideals, which explores the moral and intellectual roots of the American constitution.

Prof. Gold is working on an article on discrimination under section 8(a)(1) of the National Labor Relations Act.

Selected Works is a service of BePress Publishing that helps readers follow a scholar's most current work. View Selected Works of Michael Gold