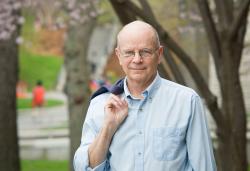 Lance Compa is a Senior Lecturer at Cornell University's School of Industrial and Labor Relations in Ithaca, New York, where he teaches U.S. labor law and international labor rights.

Before joining the Cornell faculty in 1997, Compa directed labor law research at the NAFTA Commission for Labor Cooperation. Prior to his 1995 appointment to the commission, Compa taught labor law, employment law, and international labor rights as a Visiting Lecturer at Yale Law School and the Yale School of Management. He also practiced international labor law for unions and human rights organizations in Washington, D.C.

Compa has written widely on trade unions, international labor rights, and other topics for a variety of law reviews, journals of general interest, magazines and newspapers. With colleagues in the Labor Law Group, he is a co-author of International Labor Law: Cases and Materials on Workers' Rights in the Global Economy (West Law Group, 2008), a 1000-page textbook for use in law schools and social science graduate programs.

In addition to his studies of workers' rights in the United States, Prof. Compa has conducted workers' rights investigations and reports on Cambodia, Chile, China, Haiti, Guatemala, Mexico, Sri Lanka and other developing countries. He serves on two federal advisory committees related to his research and teaching: the Department of Labor's National Advisory Committee for Labor Provisions of Free Trade Agreements, and the State Department's Stakeholder Advisory Board on the U.S. National Contact Point for the Organization for Economic Cooperation and Development (OECD) Guidelines for Multinational Enterprises.

In 2014 Prof. Compa was named the first holder of the Paul van der Heijden Chair in Social Justice at Leiden Law School in the Netherlands. He served as a visiting professor during the Fall semester, giving an Inaugural Lecture and teaching international labor law. The Inaugural Lecture titled "International Labor Law for the 21st Century" can be viewed at http://law.leiden.edu/organisation/publiclaw/labour-law/news/paul-van-der-heijden-chair-in-social-justice.html

After law school and before turning to international labor law practice and teaching, Compa worked for many years as a trade union organizer and negotiator; first for the United Electrical Workers (UE), and then for the Newspaper Guild. While on the UE staff, he was involved in organizing and collective bargaining negotiations in multinational firms like General Electric and Westinghouse, and at many medium and small-sized firms throughout the United States. At the Newspaper Guild, he represented editorial, business, and production employees at the Washington Post, the Baltimore Sun, Agence France-Presse, and other news organizations.

Compa is a 1969 graduate of Fordham University, a 1973 graduate of Yale Law School, and a member of the Massachusetts Bar. He also undertook studies abroad at the Institut d’Études Politiques in Paris, France (1967-1968) and at the Universidad de Chile in Santiago, Chile (1972-1973).