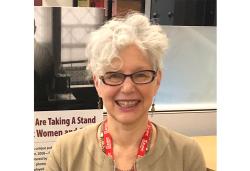 KC Wagner is the Director of Workplace Issues at Cornell University's ILR Metro District Office in New York City. She has specialized in the prevention of sexual harassment, gender bias, bullying and promoting inclusiveness in the workplace for over 30 years. Ms. Wagner has provided training to corporations, unions, non-profit, educational and government organizations in diverse industries, professions and workplace settings.

Ms. Wagner is a specialist in curriculum development and educational programs related to labor, workplace and employment related issues, leadership development and train-the-facilitator programs. She has testified as an expert witness in landmark sexual harassment cases on a range of topics. These topics have included the scope and range of what behaviors constitutes sexual harassment, common coping strategies utilized by victims of harassment and what responsible employers should do to prevent sexual harassment. Ms. Wagner also provides educational coaching to employees as part of an employer’s corrective action intervention. KC has appeared on "PBS Channel 13", “The Oprah Winfrey Show”, “The CBS Morning News”, “The Today Show”, “CNN National Cable Network News” and been interviewed for articles in The New York Times and the Wall Street Journal.

KC Wagner co-authored a study entitled “Results of a Survey on Gender Bias and Sexual Harassment in the Federal Aviation Administration Eastern Region”. She was the principal investigator on two child care and working parents studies entitled “Working Parents for a Working New York” and “Working Parents with children under 3.”

KC Wagner holds a Masters of Social Work Degree from Hunter College School of Social Work and a Masters of Labor and Industrial Relations from Rutgers University. In April 2000, she was awarded the prestigious Alice H. Cook and Constance E. Cook Award from Cornell University’s Advisory Committee on the Status of Women for her work on women’s issues. In April 2008, she was recognized as one of thirty influential leaders across the state in the area of domestic violence prevention for her innovative workplace initiatives by the New York State Coalition Against Domestic Violence.