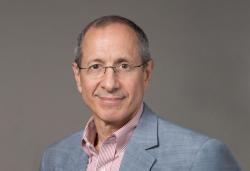 Co-Director of the National Labor Leadership Institute
Labor and Unions

Jeff Grabelsky is the Co-Director of the National Labor Leadership Institute at Cornell. He develops and delivers education and training programs and provides research and technical assistance in all aspects of union affairs. The programs he has worked on have reached over 300,000 unionists nationwide.

Jeff began his career in the labor movement working and organizing in the steel industry in 1973, has been a member of the International Brotherhood of Electrical Workers (IBEW) for thirty years, and is the former national organizing director of the Building and Construction Trades Department (AFL-CIO).

Jeff has written widely on current labor issues, including "Building and Construction Trades Unions: Are They Built to Win?" (Social Policy, Winter 2005); "Standing at a Crossroads: The Building Trades in the Twenty-First Century" (Labor History, Fall 2005, co-authored with Mark Erlich); "Construction or De-Construction? The Road to Revival in the Building Trades" (New Labor Forum, Winter 2007); “A New Alliance for New York State: A Progress Report on the Labor Movement's Restructuring” (Working USA, Spring 2007); “Building a Future Together: Worker Centers and Construction Unions” (Labor Studies Journal, March 2008, co-authored with Janice Fine and Victor Narro); “Building Labor's Power in California,” (Working USA, Spring 2009); “Emerald Cities in the Age of Obama: A New Social Compact Between Labor and Community” (Perspectives at Work, Winter 2010, co-authored with Phil Thompson); “Psychosocial Capacity Building in New York: Building Resiliency With Construction Workers Assigned to Ground Zero After 9/11” (Social Work With Groups, Winter 2010, co-authored with Josh Miller and K.C. Wagner); and “'We're Getting Our Country Back’: Reflections of Politics, Race, Labor and Community In the Age of Obama -- A Conversation with Mark Ayers, President, Building and Construction Trades Department (AFL-CIO)” (Working USA, Winter 2010). He is co-editor of Up Against the Open Shop - New Initiatives in the Building Trades, co-producer of the Construction Industry Audio Project, and co-editor of The Campaign Guide: Organizing the Construction Industry.

Jeff received his B.A. in Political Science from the University of Michigan, his M.A. in U.S. Labor History from Syracuse University, his M.S. in Industrial and Labor Relations from Cornell University, and his Journeyman Electrician Classification from the IBEW.

Selected Works is a service of BePress Publishing that helps readers follow a scholar's most current work. View Selected Works of Jeffrey Grabelsky