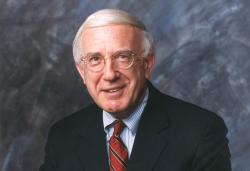 Professor Gross teaches Labor Law, Labor Arbitration, and a course entitled Values, Rights and Justice in Economics, Law, and Industrial Relations. He received his B.S. from LaSalle College, M.A. from Temple University, and Ph.D. from University of Wisconsin.

Rights Not Interests: Resolving Value Clashes Under the National Labor Relations Act, just published by Cornell University Press, is the fourth volume in his study of the NLRA and the NLRB. This most recent volume applies internationally accepted human rights principles as standards for judgment and argues that the NLRA was and remains at its core a workers' rights statute. It also shows how value clashes and choices between those who interpret the NLRA as a workers' rights statute and those who contend that the NLRA seeks only a "balance" between the economic interests of labor and management have been major influences in the evolution of the NLRB and the law. Rights Not Interests contends, contrary to many who would write its obituary, that the NLRA is not dead. Instead the book concludes with a call for visionary thinking including the U.S. Constitution as a source of workers' rights.

Professor Gross is a member of National Academy of Arbitrators and on the labor arbitration panels of the American Arbitration Association, Federal Mediation and Conciliation Service and New York State Public Employment Relations Board, as well as being a panelist named in several contracts.

3 - Developing and presenting ILR's only health and safety course: Workplace Safety and Health as a Human Right

Since completion of my fourth book concerning the NLRB, I have started researching the status of workers' rights under Section 502 of the NLRA to withhold their labor when confronted with "abnormally dangerous" working conditions.

My service focus is workers' rights as human rights.

I do these things because public service is an important and integral part of being a faculty member - in a state school in particular. It also is another way to keep in touch with the real world.