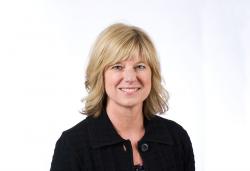 Beth Flynn-Ferry is Executive Director of CAHRS in the ILR School at Cornell University.

She earned her MBA in Strategic Management & Marketing at the University of Minnesota, Carlson School of Management, Minneapolis, MN and earned a B.S. Industrial and Labor Relations from Cornell University in 1987. Upon graduating from Cornell, she joined Hercules, Inc. (now Ashland) and worked for five years in corporate HR/OE roles as well as a unionized plant in Savannah, GA.

Beth joined General Mills in 1992 and held progressive HR roles as HR Manager in Consumer Foods Sales and HR Manager for the Buffalo, NY plant. Beth was promoted to Director in 1997 and moved back to Minneapolis. After Human Resources Director roles in Marketing Services and the Supply Chain, she moved to Toronto, Canada in 2001 as Vice President, Human Resources to help lead the Pillsbury integration for that country. After returning to headquarters in 2003, Beth held Human Resources assignments in both the Organization Effectiveness group and supporting the Finance function. She became VP, HR for the Consumer Foods Sales Division in 2004, then VP HR for the US Retail Organization in 2010 and her last role was VP HR for Corporate and Global Business Solutions.

Beth is active in the industry and community. In 2010, she was named a Top Women in Grocery by Progressive Grocers magazine. She is active in the community serving on the Board of Directors for Interfaith Outreach and Community Partners, an organization focused on hunger and homelessness. She’s also involved in youth sports through either coaching or managing her children’s’ basketball, baseball and hockey teams. Beth lives with her husband Mark, daughter Tessa and son Zachary in Wayzata. Her hobbies include golf, reading and traveling.