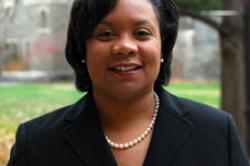 Trust in the workplace is being eroded by pay cuts, reduced benefits, layoffs and bigger workloads shouldered by survivors.

The good news, according to research by Michele Williams, ILR assistant professor of organizational behavior, is that employers and employees can take practical steps to rebuild trust.

Are they withdrawing from others in the workplace?  Refusing lunch invitations they once accepted from colleagues?  Chatting less? Working a shorter day?

"When you see those things, something's up" and the patterns often signal workplace distrust, which can compromise productivity, said Williams, who presented her most recent trust research findings at a March conference.

Start building trust by imagining how others – your peer, subordinate or boss – experience a situation, Williams said.

Then, she said, "Open a conversation, even when all you know if that something doesn't seem right."

Williams calls that "perspective taking" and says the trust that it builds is especially important in a recession.

Perspective taking might even result in a better performance review.

Williams's research with 147 mid-career professionals and their bosses shows that a supervisor's perception of worker benevolence can positively affect performance assessments.

Perspective takers gently test their hunches, Williams said, by asking questions such as "is that project going alright?" or "you seem concerned about something."

"As a result, coworkers and supervisors perceive perspective takers as benevolent and trustworthy" she said.

In the workplace, that translates into people being less suspicious of others' motives, going the extra mile, increased adaptability and improved organizational outcomes, she said.

People are embattled by economic issues outside of work – a spouse's layoff, increasing bills, devalued investments.

Stress builds and workers "are more sensitized to what they perceive as betrayal at work," Williams said.

However, in today's outcomes-focused workplace, distrust cues are often overlooked.

"The signals are there, but they don't get picked up because people are so focused on tasks," she said.

Don't assume you know the root of someone's apparent distrust, Williams said. "You can easily be wrong."

Perspective taking, at the very least, often helps sort what is a work issue and what might be spillover stress from other areas of a person's life.

More information about Williams and her research is available at http://www.ilr.cornell.edu/directory/mw326/.