Class of '22 a Record Breaker

ILR’s new class posts a yield rate of 79 percent, the highest in the school’s history. Seventy of the 164 first-year students identify as African-American, Latino or Native American, underrepresented populations in higher education. 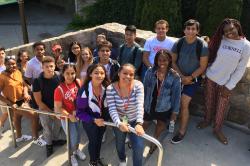 The Cornell chimes, the gorges, one’s first forays into Ives Hall, the camaraderie – those are some of the memories in store for the ILR Class of 2022, which has broken school records for diversity, yield and academic profile.

“It is important for ILR to strive to reflect the actual workforce, since this is what we study,” said ILR Undergraduate Admissions Director Angela Herrera.

“If we don’t have diverse voices with diverse experiences in the classroom, then students will not be prepared to go out into the workforce and work with diverse individuals. It is critical that we lead the way in these measures at Cornell and across higher education.”

Herrera said that this year’s yield rate – 77 percent – is the highest in ILR’s history and is second at Cornell to only the School of Hotel Administration.

“Students want to be a part of our community and learn in our program. This means we did our job in getting the word out and really finding great fits for ILR.”

Yield is the percent of admitted students who choose to enroll. High yield indicates high interest in a college, and is considered a reflection of a college’s selection process.

“It is an incredible accomplishment for us to have a remarkably high yield because we actually took fewer early decision students than we have in previous years. This means that the majority of this amazing yield is made up by the regular decision students,” Herrera said.

“I attribute this to two things: our yield activities such as Cornell Days and our application review process. We found amazing students who really fit our major,” she said. “This remarkable group of incoming students also boasts a higher academic profile than in previous years.”

ILR has posted a 100 percent yield for Educational Opportunity Program students during the past two years, Herrera said.

More than 80 transfer students bring the number of new students joining ILR the highest in many years.

The ILR admissions team welcomed more visitors, had more students participate in Cornell Days and had more ILR Admissions Ambassador involvement than ever, resulting in strong connections that resulted in a record-breaking class, Herrera said.

Students in the Cornell Class of 2022 are from 43 countries. The class is 54 percent female, and students of color represent 48 percent of the freshman class.