"We Have a Planetary Emergency" 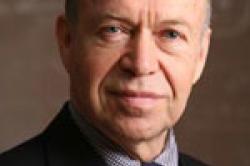 "The truth is, we have a planetary emergency," Hansen said. Union representatives from 18 countries listened in silence as Hansen described what is happening to the earth's climate, ice sheets, oceans and weather patterns.

Hansen's presentation can be seen at http://www.youtube.com/watch?v=-dbmqhon5TY.

"The volume of Arctic sea ice has been reduced by 75 percent in just 30 years. Greenland's ice sheet is losing mass at about 300 cubic kilometers per year. Sea levels are going up, and there is a danger that the ice sheets will begin to collapse and we could get several meters (of rising sea levels) in one year – which would be disastrous," Hansen said.

"The frequency of extreme weather events is changing because the planet is getting warmer. It was exceedingly hot this past summer, and the frequency and area covered by these events are both increasing."

"We have only burned a small fraction of the fossil fuels, but we can not burn all of them. And yet the governments are going right ahead, encouraging even more use of fossil fuels through mountain top removal, tar sands, tar shale, drilling in the Arctic. We can't do that if we want to be fair to our children."

Solutions for the climate problem and for our children's futures are really going to depend on workers understanding the situation, he said.

"It's hard to communicate with people if they feel their job is threatened, but the jobs associated with clean energy technologies would be good jobs. Workers will get much better opportunities. We need to have cooperation and understanding between labor and environmental organizations and people who are concerned about the future of their children."

In an interview following the presentation, Hansen said, "Unions are an important force globally. They represent hundreds of millions of workers and their families. The thought of having them joining in the effort to bring about an energy revolution to fight climate change is very exciting. Stabilizing the climate is a battle for survival that needs everyone involved." Hansen said he was speaking as a citizen, and not a NASA employee.

In his talk, Hansen urged that a price be placed on carbon emissions at source. This, in turn, he said, would unleash the development of clean and renewable energy, energy conservation and next-generation nuclear power, which Hansen regards as an important option in the global effort to reduce global warming pollution.

Hansen's policy proposals sparked a spirited debate among the attendees. Union representatives from Latin America and South Africa questioned whether pricing carbon should be the main solution, given the capacity of the fossil fuel companies to control the political debate.

Energy unions from Canada, Nigeria, Trinidad and Tobago, and Russia echoed Hansen's call for unions to be part of the solution to climate change and to seize the opportunities to build unions and create jobs.

More information about the roundtable, including participants, presentations and trade union statements on climate change and energy, is available at
http://energyemergencyenergytransition.org/.