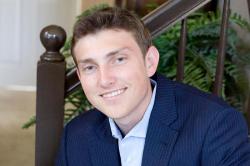 Peter Cetale '19 isn't waiting until after graduation to launch his business career.

The budding entrepreneur, who got his start creating a food delivery service app when he was 16 years old in his native San Diego, has launched Religio.

The enterprise software company is designed to give churches online tools to better connect, engage and retain parishioners.

The goal of Religio, Cetale said, is reversing declining membership numbers. Twelve churches, mostly in the San Diego area, are the first to use the software.

Religio gives churches a web and mobile platform for members to communicate with their churches and with other members, Cetale said. Churches can also use the app to collect donations, do accounting and collect data analytics to pinpoint trends.

They started by creating Church Deposit their freshman year. The program helped churches organize and manage collections, and allowed members to donate using an app.

While meeting with churches in the San Diego area about that program, Cetale realized that the real issue for churches is dwindling memberships and participation. That led to the creation of Religio, which now includes Church Deposit's donation integration.

"Churches are not very technically proficient, so we are helping them use technology as a tool so they can get feedback from members and react faster when necessary. It also gives busy members an opportunity to participate in more activities online."

Cetale said ILR classes such as "The History of American Consumption" and "American Capitalism" helped as he worked on Religio.

He has also founded and is the president of two student groups that meet weekly for speakers, project teams and networking, the Cornell Entrepreneurship Club and the Cornell Marketing Organization.

"The ILR School has been a great atmosphere to learn and grow in," he said. "My classmates are innovative thinkers who have challenged me to move in exciting new directions."

After graduating, Cetale plans to focus on expanding Religio.