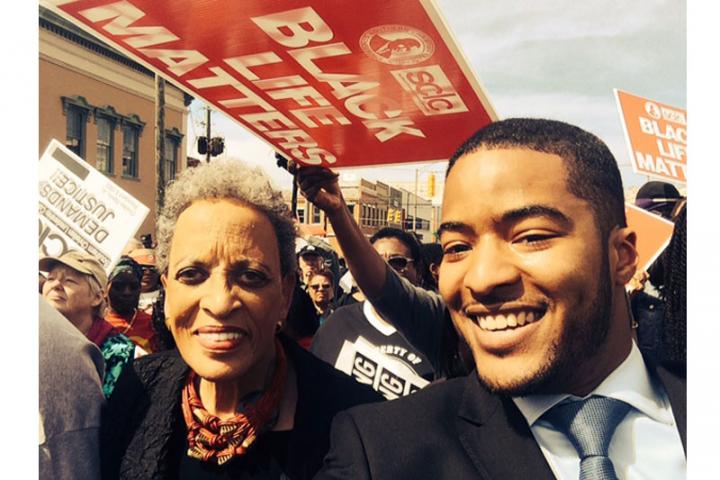 This “Cornell Perspectives” piece was originally posted in the Cornell Chronicle.
By Thaddeus Talbot

On March 8, I had the privilege of walking across the Edmund Pettus Bridge in Selma, Alabama, to commemorate the 50th anniversary of Bloody Sunday. The experience was sacred and humbling. More than 100,000 people gathered on that hot Sunday morning, linking arms with each other and walking in harmony to the tune of the Negro spirituals we sang along the way. The crossing was a historic celebration of the passage of the Voting Rights Act of 1965 and the progress made in America’s political landscape.

Consider what this march looked like 50 years ago. More than 520 civil rights leaders – including the Rev. Martin Luther King Jr., Congressman John Lewis, the Student Nonviolent Coordinating Committee and the Southern Christian Leadership Conference – carried satchels filled with food and clothing for the 50-mile walk to Montgomery, the state capital. They were confronted by Alabama state troopers wielding billy clubs and gas grenades. Within minutes the mêlée now known as Bloody Sunday became the backdrop for the biggest voting rights drive in American history.

Yet in 2015, all that awaited us on the other end of the bridge was a huge gospel concert. State troopers were present, but they were greeting not beating. If we juxtapose the scene in 2015 to that of 1965, it would seem that our country has made significant progress in granting voting rights to its citizens – and it has. But as I learned from local community members, the struggle for the full realization of voting rights is far from over.

Take, for example, the mock trial competition for which I served as the foreman. It tackled the issue of whether the federal government should be held responsible for the abrogation of the voting rights act. The prosecution convincingly argued that the heightened trends of mass incarceration against minorities and the concocted voter identification laws, like those in Wisconsin, serve as institutional blocks for potential voters, many of whom are black. The defense rebutted that states, not the federal government, are to blame for these unfair laws. Both sides conceded that disparate treatment and discrimination is alive and well.

One of the most powerful moments of that trial was when the mother of Eric Garner, Gwen Carr, took the witness stand. The crowd grew silent. I, along with the other 10 jury members, inched forward in our seats as if magnetized by her presence. Carr spoke about the ways in which state governments allow the reckless killing of black men, including her son, who was suffocated to death by New York City police officers after exclaiming “I can’t breathe” 11 times. Such killing not only eliminates the possibility of exercising voting rights for the deceased but heightens tension between the community and law enforcement, resulting in apathy toward the power of the poll. The sentiment becomes: What can voting change when the dignity of life is disregarded by the few police officers appointed to protect and to serve?

The mock trial reminded me of all the hardships black Americans overcame by uniting to achieve equality. President Obama acknowledged this truth in his speech, saying: “The Americans who crossed this bridge were not physically imposing, but they gave courage to millions. They held no elected office, but they led a nation. They marched as Americans who had endured hundreds of years of brutal violence and countless daily indignities – but they didn’t seek special treatment, just the equal treatment promised to them almost a century before.”

While I met and walked with many great leaders that weekend, including Johnnetta Cole, Rev. Jesse Jackson, Roland Martin, Danny Glover and Selma marchers from 50 years ago, my source of inspiration came mostly from the ordinary people who shared a firm, unequivocal belief in the right to vote. They marched in Selma not for the pomp and circumstance of participating but because they desired to carry on a historic and sacred struggle. I am forever reminded of my responsibility as a leader in the younger generations to uphold the legacy of civil rights advocacy but also to create it anew so that generations to come will find their own paths to full equality.

That said, I would like to thank all of my supporters for helping me to experience the 50th anniversary of Bloody Sunday in Selma. In two weeks, I raised $1,095 from Cornell faculty, staff, alumni, close friends and many others and created a website where all of the photos and videos from my weekend in Selma are displayed.

Thaddeus Talbot ’15 majors in industrial and labor relations. He plans to work in the labor movement as a field organizer after graduation in May. He recently earned the Irving Ives Award, given to one Cornell senior in honor of the ILR School founder.