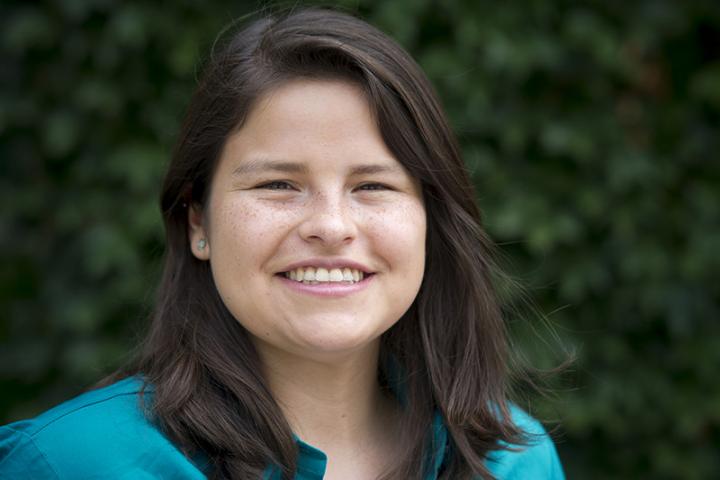 Cornell’s Prefreshman Summer Program is a rigorous, six-week summer program designed to help students prepare for the challenges of their freshman year. ILR students invited to participate take courses that are counted towards their ILR core requirements for graduation.

According to Angie Estevez-Prada ’17, who participated in the program as a student and who has worked as a residential and program assistant at Cornell’s prefreshman program for the past two summers, the leap to college from high school can be hard for many students.

“My job is basically to be the guiding force between the academic and residential sides, as well as connecting with students as someone who has already benefited from the program.”

Estevez-Prada describes herself as a peer mentor, an adviser and a human face who students can see, and who was in their shoes just two short years ago.

“It’s for them to see themselves within us as we guide them through our own experience, knowledge of on-campus resources, and being that person who they can go talk to because we aren’t intimidating administrators, so we work to be helpful and be there for them as a peer, leader and role model.”

For many students, the initial shock or excitement felt when opening their Cornell acceptance packages often is quickly replaced by emotions of fear, self-doubt and uncertainty.

“When I got accepted by Cornell I thought it was a joke because I never in a million years thought I would actually be accepted here,” she said. “A big fear of mine was that I was going to get here my freshman year and fail out because I lacked confidence in my own ability to succeed at this level.”

Coming from a very rural high school in North Carolina, Estevez-Prada cites much of her college preparation as her own initiative. Few Advanced Placement classes and SAT tutors were available to her.

Through invitation only, the prefreshman program was created to support such students as their college careers begin.

“The pre-freshman summer program, when I got accepted, was a little bit of a blow because it was reaffirming that I needed to do this program in order to be successful. But once I got here, I realized the incredible benefit of it because they give you that encouragement,” Estevez-Prada said.

Surrounded by familiar faces and close to home, studies in high school are mainly about memorizing facts and figures according to a mandated curriculum, Estevez-Prada explained. She articulates that college, on the other hand, is about exploring, critical thinking and multiple answers. That mental switch can really be a big challenge.

“I completely think that’s one of the best reasons why I am so happy here and why I’m so successful. They encouraged me and believed in me in a way that no one had ever done before – and that’s what I want to do in my role in PSP.”

Students generally enroll in regular summer-session courses; enrichment courses in areas such as writing, chemistry or mathematics; and/or a college-achievement seminar with course schedules for each student determined by their colleges.

This year, 11 ILR students are taking part in the program; last year it was 17. Estevez-Prada says that many need to build confidence in their abilities during this transitionary program, a challenge that she sees often.

“It’s happened last year and it happened this year where they don’t think they can come to Cornell and be successful, so the biggest challenge, I think, for these students is getting over the idea that you’re not good enough.”

But over the six-week time period, Estevez-Prada says that students adjust from the lessons they learn, push through and prepare for the coming academic year.

“The biggest highlight for me was seeing the students from last summer’s program go through their freshman year,” she reminisced. “I think it’s incredible because they become so involved on campus and so successful and cite PSP for the motivation it gave them.”

The program includes field trips, guest lectures and a range of social and cultural activities. Participation is restricted to students selected by college or special program offices. Students selected to attend are notified by mid-April. Tuition and fees, including room and board charges, for those selected are covered by the program.

According to Estevez-Prada, the Prefreshman Program and success for those students who attend go hand-in-hand.

“Know that this program is incredibly important and that it really builds the foundations to be a successful Cornellian and I think we should continue to support it and build foundations to let it grow.”

“Right now, it is still pretty small and I think it could really expand so that more students can get the opportunity.

“Students who do PSP tend to be some of the most successful students in ILR – I think it’s really interesting that that occurs.”