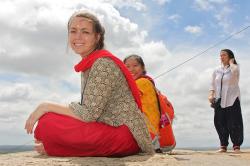 “Judges are overworked and a lot of cases were not resolved, so we were hoping to start a campaign to improve labor relations and use the alternative dispute resolution process as a way of bringing people together,” Palacios said. “Our goal was to resolve labor disputes in a different way than through the courts.”

Chung said they did a comparative case study of alternative dispute resolution in India vs. United States, which highlighted the strengths and weaknesses in both countries. “A major shortcoming we became aware of in India was that there is a lack of legal education,” she said. “Our objective was to create a primer on alternative dispute resolution for labor lawyers so anyone would have access to legal recourse. Accessibility would be more effective and less expensive than the court system.”

“I think we were able to accomplish our goal,” Chung said.

In a second project, they created employee satisfaction surveys for Nestlé India. After interviewing employees at its plant, Chung said, “That was one of the most rewarding parts, being able to interact with the workers on the manufacturing line. It was a good reminder of the necessity to connect with the world outside of my bubble.”

Palacios said she welcomed the challenge of another international experience. “I was more focused on research and policy, but it was just as rewarding,” she said.

Palacios and Hannah Cho ’19 spent their winter break this year in Nicaragua, for a 10-day human resources consulting project that they call life changing.

Palacios and Cho worked with students from the American University in Managua in an Engaged Learning project. The ILR School partners with Thriive, a nonprofit organization that helps businesses in developing markets grow. Thriive provides funding for the businesses, and in exchange, the businesses pay it forward by providing products or services to people in need, offering job training and creating jobs.

Palacios and Cho said they are proud of what they accomplished and how they applied classroom learning.

“Our intro classes focused on American and multinational corporations, and suddenly, we were working in a small business in a different culture,” said Palacios, a native of Ecuador. “It was very eye-opening for me.”

Cho said the biggest lesson she learned was that classroom knowledge is only applicable in the cultural context. “I learned to be very aware of that context,” said the American-born Cho. “It’s not enough to recognize that there is a different culture that exists. We had to learn how to apply what we have learned to fit their needs.”

Palacios and Cho advised two Nicaraguan businesses facing very different challenges. The shoemaking company was family-owned and had no HR structure; they usually hired by word of mouth. The wheelchair manufacturer had some structure, but most of its employees were deaf and there wasn’t a universal language.

“The culture is family-oriented. The employers care about their employees and hire through a network of personal connections, but that’s not the best way to find the right talent,” said Palacios of the shoemaking company, which hoped to attract more international business.

The wheelchair company employees were very skilled and used sign language among themselves, but translation with others was difficult, Cho said. “The technicians could not communicate well with customers who had questions.”

Palacios and Cho interviewed owners and employees, developed solutions, and collaborated with the Managua students in presenting their plans to the business owners.

With the shoemaking company, they helped the owner establish HR policies. “They were producing very good shoes, but they did not have enough employees, so he was very interested in our ideas about hiring,” Palacios said.

With the wheelchair company, they recommended a standardized signing system, and hiring and training an employee to be a liaison between the technicians and customers. “The owner was very receptive to our ideas.”