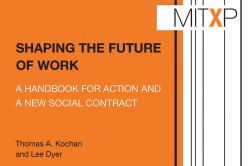 There is a way to share economic wealth and it requires a new social contract be drawn by business, workers, labor, education and government, according to ILR Emeritus Professor Lee Dyer and MIT Professor Thomas A. Kochan.

They are the authors of “Shaping the Future of Work: A Handbook for Action and a New Social Contract,” published this month by MITxPress, a collaboration between MITx, which makes MIT courses available online, and the MIT Press.

There is concern about inequality and how to address growing economic gaps in the United States, “but it is not as deep or as broad as it needs to be,” Dyer said in an interview.

The book, the authors hope, will be fodder for a new way of thinking, one that will help reverse income inequality that is sharper than any time since the 1920s in the United States.

Dyer and Kochan urge businesses to choose high road business and employment strategies that are “capable of generating both good financial returns and good jobs.” Extensive worker involvement, heavy investment in training and development, greater work schedule flexibility, and aggressive enforcement of equal opportunities are among the recommendations for how businesses can take the high road.

Educators, the professors say, need to make lifelong learning for workers a priority. Also, workers need to be willing to invest in lifelong learning to avoid becoming redundant in an economy based on knowledge, innovation, and constant change.

Educators also need to help students “not only learn how to understand and embrace differences across racial, ethnic, gender, age, and socio-economic lines, but also how to demand equity through a thorough grasp of relevant laws and the development of strong bargaining skills.”

Kochan and Dyer also support the search for new sources of power that would allow workers to demand middle class or better wages. This includes new strategies for established labor unions, as well as efforts to reinforce the efforts of new worker advocacy groups emerging at regional and local levels.

Much is needed from government to support a new social contract, but some of the relatively easy wins would include early childhood education, apprenticeship and other training, and retraining for laid-off and at-risk workers.

Collaboration among stakeholders is the essential ingredient for creating a new social contract that shares wealth more evenly and produces meaningful jobs, they write.

Working locally to address needs as they emerge is central to changing the social contract, according to the authors, who cite the “Fight for $15” minimum wage effort and the petition for improved Starbucks scheduling as examples of local actions with resounding impacts. If stakeholders can change, the economy can create good jobs with adequate wages for all, the authors write.

Dyer and Kochan, colleagues for 40 years, said they were motivated to write the book and teach a related course because they are concerned about the future.

“Never before have we been more worried about the legacy our generation is leaving to the next,” they write in the book’s preface, citing issues such as extreme politics, terrorism, Brexit and fears about technology eliminating jobs.

For several years, Dyer and Kochan have been simultaneously teaching related courses that have allowed them to vet some of the ideas offered in the book. Dyer’s course is called “Forging the Future of Work.” It was adapted from an online course taught by Kochan, the George M. Bunker Professor at the MIT Sloan School of Management and co-director of the Institute for Work and Employment Research.

In the courses, students simulate how stakeholders can succeed in making the workplace a more equitable place. “They struggle” with issues, Dyer said, “but are able to agree on some things.” The students’ efforts “demonstrate the feasibility of engaging the next generation of leaders in meaningful dialogues to forge new and improved versions of work down the road.”

The authors urge others to try the simulation online – “use it to engage colleagues in other spheres to compare viewpoints, search for common ground, initiate action, and ultimately shape a better future for all Americans.”